The 12 Best "Kid" Gifts for Adults 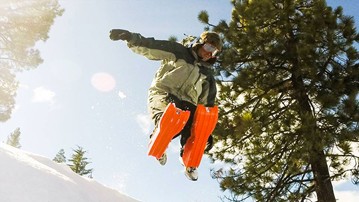 Kid. Kid at heart. Grown ass man who just likes Star Wars and video games, OK?! They're all welcome here, and this list of the 12 best "kid" gift for adults should make them all very happy.

In September 2020 LEGO released a series of buildable brick pop culture posters, each with an accompanying soundtrack. They call them LEGO Art, and their interpretations of Andy Warhol's Marilyn Monroe, The Beatles, Marvel Studios' Iron Man, and Star Wars' The Sith build into home decor, and play as jams even adults who think they've outgrown LEGOs are gonna wanna get their nimble fingers (and sensitive, brick-treading feet and toes) all over.

By the power of Nerf design genius and (a whopping) 6 x D batteries, the Nerf Mega Mastodon shoots 24 Mega Whistler darts from its auto-rotating drum. One right after the other at rapid-fire speed, and with Mom-incensing sound effects, it fires its projectiles up to 100' apiece. Also, like the tusked behemoth it takes its name from, the Mastodon is real, real big.

Sled Legs are made in Canada. And that's your news for the day that contains no shock value, no potential for angering the masses, and nothing that makes you question how the hell we got here. In fact, it might be the most comforting news you hear all year, because of course. Of course Sled Legs are made in Canada. Where else would 100% wholesome, G-rated strap-ons come from?

Consoling us even more: Sled Legs say they're here to "make winter fun again!" And oh boy could I ever use some fun this winter.

Sure you want to open that fridge? Really need another scoop of potato salad and swig of chocolate milk? Is it worth risking, oh, I don't know getting frozen in carbonite alongside your buddy Han Solo? Welp, if your hankering gets the best of you, better be sure you've got a Boushh-disguised Leia in the house to get you out of it.

Fresh and cool from FridgeWrap is the Han Solo in Carbonite wraparound refrigerator decal, obviously featuring the equally fresh and cool smuggler in one of his more compromising (albeit still fine!) moments.

Twinkie, Twinkie little star / how I wonder what you are...still doing in your giant Party Size Twinkies baking pan. Get! In! My! Belly!

Hostess has released a Party Size Twinkies Baking Kit to celebrate this holiday season, and even though I've never before associated Twinkies with Christmas, or heard of kiddos leaving Twinkies out for Santa, I am all in. Let the Party Size Twinkie replace the Yule Log. And definitely the fruit cake. Peppermint bark and Panettone can peace out with the peace on Earth too. Party Size Twinkie on a plate to myself plus a pint of heavily spiked eggnog: now that's the 2020 Christmas cheer I'm talkin' about.

My Little Golden Book About Ruth Bader Ginsburg brings the late, great Supreme Court Justice RBG into homes as both an educational bedtime bonding tool for parents and children, and the best piece of collector's merch for RBG stans since the Ruth Bader Ginsburg Action Figure.

While much of 2020 has been out of our control, 8BitDo reminds us something big, something uniting is coming in November that puts things very much in our control: the 8BitDo Arcade Stick. The Arcade Stick is an oversized, dynamic, customizable, and moddable cross-platform game controller for Nintendo Switch and Windows.

Arcade Sticks come loaded with 8BitDo Ultimate Software, which essentially means you're their programmer. You can customize button mapping, create macros with any button combo, and use its 2 dedicated macro buttons to tailor 2 completely different controller profiles, and then toggle between them based on your Switch or PC hookup. Or any other time.

If you've never been hit in the face with a basketball, the ceilingSWISH indoor mini basketball hoop is the perfect opportunity to get in some good practice. At least the "rock" that comes with this ceiling-mounted hoop and net looks soft enough that you won't break your nose every time hand-eye coordination fails you on the rebound. Or...yuk, yuk, yuk...shoot your eye out.

Forget enemies and evil villains, what you really need some indestructible adamantium dagger claws to put in check is your corn on the cob. These new Wolverine corn cob holders - delightfully named Corn on the Claws - come in sets of 4, so both you and your friend Cornelius can divide, skewer, and conquer entire bushels of sweet and juicy corn when summer BBQ season rolls back around.

Terra Kendama has created The Pill, their own redesigned version of the traditional Japanese Kendama toy, to test your hand-eye coordination, balance, and reflexes. These tests are super fun ways to pass the time and experiment with creativity. And also super quick ways to frustrate the hell out of yourself and learn how far you can chuck a 4" cylinder of wood. Closed shut in its namesake Pill formation, and then maybe again split apart medieval-flail-style into its spiky and blunt halves dangling from the ends of a string.

Let me get this straight, Cuddle Clones. I send you photos and details about my cat Zanzibar, and you spend a coupla weeks hand-turning them into a stuffed animal? So that I will then have one cat that walks on my face while I sleep, pukes up his cat innards on my Xbox, and nudges me to pet him, and then spontaneously and aggressively claws me when he decides he's done being petted; and a second cat that looks exactly like the first cat, but commits none of these injustices towards me, and in fact wants nothing from me at all except for the occasional cuddle? Which will really only benefit me?

Is it possible to send you Zanzibar himself to be Cuddle Cloned, and for you to just send me the Clone back at the end?

Nothing like the thought of pelting my friend Cornelius with a Spyra One water bullet to get me amped up on this Wednesday afternoon! Well, that and tacos. The Spyra One calls itself a next-gen water gun, a battle toy that replaces the streaming shots of other water guns with a powerful 30mL "water bullet" capable of hitting targets with balls-H2On accuracy from up to 25' feet away.

Spyra One creator Sebastian Walter sought to develop a water gun people could use as they would a paintball gun - to fight, score, and take out the competition. Spyra One uses a valve-nozzle and electronic trigger system to generate its water bullets, which Walter says leave a clear water mark upon impact so you know when you've hit your target.

Grogu! Grogu! Grogu! Pinnacles of cuteness unite, as the cutest being ever is incorporated into the cutest houseplant ever. Between Baby Yoda (not gonna stop calling him that) and the Lamborghinetta Tractor, my heart is on the verge of a warm, fuzzy explosion.

Rather than Chi-Chi-chi-chia-fying The Child himself, Chia Pet opted to nestle Baby Yoda in a soft basket of chia flora to comfort him as he awaits his next feeding. Here's hoping chia sprouts make good frog bait.

When you're buying a gift, they say it's the thought that counts, but depending on your gift recipient, it's not the thought at all. It's the gift that counts. Its aesthetic. How cool it is. How much its owner wants to...

18 Gifts You Won't See on Every Other Gift Guide

Perhaps not all of us are in the splurging spirit - or giving spirit at all - this year, but not all of my 17 luxury gifts for 2021 are profanely unaffordable. Some of their prices, such as the Titanium Beer Mugs pictured...

It wasn't deliberate, but turns out these 14 sustainable gift ideas aren't just eco-friendly products ready to be wrapped and presented to all the environmentally conscious cats on your Christmas list this year, many...

Artisans, craftspeople, entrepreneurs, dudes and ladies with random product ideas that take off like persons of interest from Congressional subpoenas - these are the people who make the holidays, and gift-giving in general...