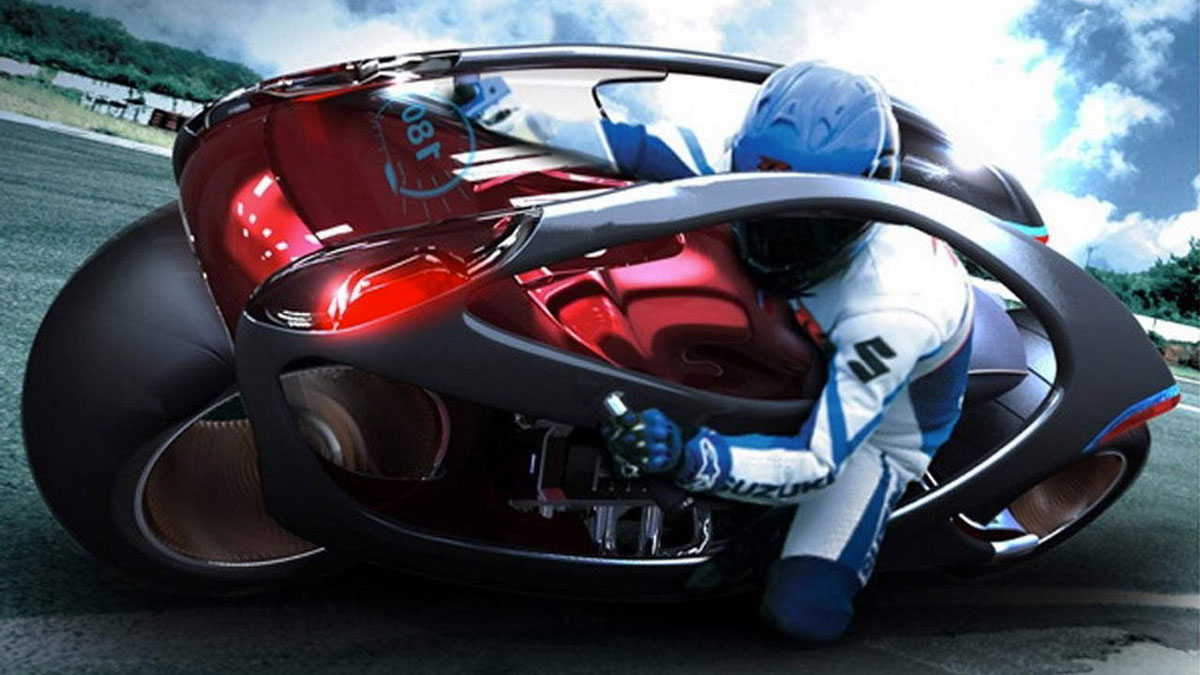 While all 10 of the motorcycles in the slideshow that follows are legit eye candy for those of us looking to make the most out of our slack-off time at work, dude, you've got to be high to ride some of them. And I think the creators were most definitely high when they designed and built some others. Like #1. Its maker constructed that V8-powered freak of nature from scratch, crotch rocketed it a few laps around a parking lot...and then crashed, almost killing himself in the process.

And on that note, here we go! For all you adrenaline junkies, bored 9-to-5ers jonesing to make the 5 arrive faster, and kids craving some mind-altering substances in the form of hallucinogenic bikes, here are my picks for the 10 Trippiest Motorcycle Designs.

Note: While some of the following bikes are available for purchase, most are one of a kind and were not made for commercial distribution. If an item was for sale at printing, its entry will include the purchase price. All prices are listed as they were at printing. Prices are subject to change.

PS: The image above is a Hyundai concept bike by Min Seong Kim. His design would be made up of materials that stretch and contract in sync with your body to enable steering without any sort of secondary system or apparatus. During turns the body of the bike would relax to take smooth corners; during acceleration it would contract and become rigid for support.

Dodge Tomahawk. Technically, Dodge debuted its Tomahawk, a motorcycle with a Dodge Viper engine and top speed capabilities of 420 mph, over a decade ago at the 2003 North American International Auto Show in Detroit. But with the bike's concept-only status, denial of street legal classification, and inability (or unwillingness) to demonstrate speeds above 100 mph, it's really more like they debuted it in their dreams. Specs: 4 wheels; 500 HP, 8.3-litre, V10 SRT10 engine.

Uno Dicycle. Bad news: it's like a Segway. Good news: it was designed by a 17-year-old kid. The Uno recruits a pair of gyros, one for forward-back movement and one for turning, with users controlling speed and direction with their body's lean. Ben J. Poss Gulak built it solo on Google SketchUp (yep, the free one) and unveiled the 2-wheeled wonder (it looks like a unicycle because the uniaxial wheels are set close together) at the Toronto Spring Motorcycle Show in 2008. Since then Gulak has developed Uno III to improve the safety of the electric vehicle. Uno III uses the same closely-paired wheel concept as the original, but adds a third wheel so that the dicycle can shift open and transform into a tricycle.

The Black Widow. Wamp, wamp. This trippy steampunk bike isn't just unrealistic, it's altogether unreal. Russian graphic designer Mikhail Smolyanov has a thing for rendering concept bikes. He's got some beauties, many of which are often mistaken for custom fabrications, but it's all smoke & mirrors. Digital trickery. A big fat hoax. The kiss of the black widow.

Gibbs Biski. $TBD. This amphibious motorcycle isn't a one-off, or even part of a limited edition run. While the water bike's price has yet to be set, Gibbs' Biski will be available for consumer purchase. If you can't decide between spending your Saturday cruising the winding roads or gliding through the water beneath them, this is the ride for you. The Biski can hit 80mph on land, and then shift seamlessly into the water, tooling you along at up to 37mph with 55 horses o' power. Transition time is less than 5 seconds.

Behemoth Bike. Sure, it's a big bike, but Behemoth wasn't named for its size. According to builder Game Over Cycles this mottled copper piece of gothic goodness was named for "the global Polish icon of metal music," the band Behemoth. Crazy, right? I didn't think Poland had a global icon of metal music either! Now that I've seen the Behemoth though, I'd say the country definitely has a global icon of metal bikes. Motorcycle components include a RevTech 110" engine, Legend air suspensions at the front and back, a 19" front and 18" rear wheel, and 360mm Monster rear tire.

HEMI Big Wheel. Chrysler once hosted a "What Can You Do With a HEMI?" contest, challenging inventors and tinkers to blow their minds with creations built from a trademark Chrysler hemispherical combustion chamber engine. The HEMI Big Wheel is what Marcus Braun of Vancouver, BC showed them.

A 4' tall tire fronts the HEMI Big Wheel, while a set of regulation-sized racing slicks flank a 5.7-liter HEMI V8 engine at the back. Braun capped off his ride with a Dodge Viper bucket seat.

Gunbus 410. $350,000. A Texas-sized hog made in southwest Germany. Leonhardt Manufacturing's Gunbus 410 owns the current title of World's Biggest (Running) Motorcycle. That means you can really own and operate the steel-and-aluminum behemoth, whose meticulously handmade body and operational parts set it at 11.3' long and 1,433 pounds. Men under 5'6", forget about the monster truck. Your first-class ticket to Alpha masculinity is straddling the seat of Gunbus 410. Let's just hope the Baby Jesus hears your prayers for your arms to reach the throttle.

Krugger Motorcycles BMW K1600 NURBS. Some may say Fred "Krugger" Bertrand's overhaul of a BMW K1600 isn't so much strange as it is byooo-teee-ful, but whether you see it more as a piece of art or a piece of What the F, there's no arguing that the NURBS is a trip. Bertrand received his subject as a gift from BMW of France, which requested he keep the bike's 161 HP engine and its electronics in place, and then go to town with his redesign of the rest. The result took 3,000 hours, and includes hand-built aluminum and steel bodywork, radiators repositioned on the side to expose the K1600's 6 exhaust pipes, and single swingarms attaching both wheels.

OCC Dragon Bike. When Orange County Choppers opens a showroom in Beijing, they do it with a bang blast of fire. Using 3D printing tech, carbon fiber-wrapped polyurethane foam, and a 100-cubic-inch fuel-injected V-twin motor powering the rear wheel through a 6-speed Baker gearbox, OCC built this 10' long Dragon Bike fusion as one of their first Chinese commissions.

McLean Monocycles. Kerry McLean does not like teamwork. He builds alone and he builds with one wheel only. He made this Rocket Roadster, a V8-powered monocycle in 2001. He also crashed it doing a demo in a parking lot that year. Fortunately he's had better luck with other mono-models, including his mainstay, the 5HP McLean Wheel.

I doubt it's as easy as opening an umbrella to install, but this umbrella-style car sunshade sure looks dandy in use. Not to mention space-saving when in not-use, since it does mimic its namesake's collapsed size and...

A water bottle and mister in one?! Oh, too cool. I mean, O2COOL! Ha! That was deliberate, right? Good one, dads who run the O2COOL brand. I hope the quality of your Mist 'N Sip Misting Water Bottles can live up to the...

Thanks to Takara Tomy's Transformers x Canon EOS R5 Camera mashup, you can now use Optimus Prime to shoot people without consequence. They will probably even thank you for aiming the Autobot leader their way, though they...