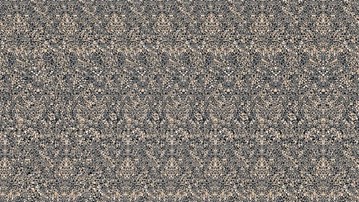 I've found some choice anatomical optical illusions for your viewing pleasure this evening (or morning with your computer rearview mirror on your monitor at work). Most are just momentary illusions whose true nature is easy to spot in a second or two, but that's what makes them fun. Because even the idiots will see the weewees, teetees, vajayjays, and sphincters in plenty of time to be offended by them.

The exception to the easily unwrapped illusion might be the image above. Remember the (pre-internet) viral Magic Eye puzzles and books of the 90s? Focus in, dudes, and relax your mind. Let your eyes go blurry for a sec, and then...then...let the 3D image appear! Crystal clear!

The Magic Eye phenomenon even made it onto a 6th season Seinfeld episode, "The Gymnast". Elaine's boss, Mr. Pitt, wasn't one of the "gifted seers" who could find the image amidst its mash of colors and patterns. How about you? Can you spot the anatomical optical illusion here, and the ones in the rest of the list?

Oh hey, it's the son of Thanos. Too bad he doesn't seem to have inherited Dad's Titan strength, ripped abs, or Titan strength. Just the ol' nutsack chin. He, or anyone wearing the "Double Chin" Mask, should probably pair it with this men's Thanos one-piece swimsuit to clarify they're related.

Some notes about MacAweenie & Cheese penis pasta: 1) It may be the only collection of penises whose default setting is "hard", but which women prefer limp. Or at least much softer with maybe a slight al dente finish; 2) The twist on Mac & Cheese is terrific for bachelorette parties, gag gifts, and teaching children about the birds and the bees. In the latter case, I recommend using a mini taco in the presentation as well.

Important Parts: A Coloring Book for the Crotch Enthusiast

Author / illustrator Heather Edwards says, "This book is for anyone with a crotch." So, about 50% of the population, and about 0% of Dude's demographic. Well. You don't have to buy the Important Parts coloring book to enjoy taking a look at a few of its line drawings of wieners, testes, boobies, and vajayjays here.

Voluptuous breasts know no genetic gifts or gender with this Big Bust T-shirt. The optical illusion-printed top is a Japanese design that equips anyone wanting a D-cup with the boobies they'll need to face the world head-on.

But not sideways. Remember not to turn sideways.

Have you heard the one about the cock and the slug? Artist Evgeny Hontor handmakes these phallic sculptures from casting resin, acrylic, smooth cast 300, velvet clay, and polymer clay, achieving a most excellent and colorful effect. She says the lil' guy "will be a beautiful original gift for your boyfriend and good decor for [an] adult's bedroom."

Well, uh, yeah. I guess the "illusion" is up as soon as someone sees you head - er, labia? - on. "Originality Shell" is a pretty clever name for this mask depicting the anatomy of a scallop on the outside and the anatomy of a lady on the inside too, since all vaginas are unique and true originals.

I've heard of a dickhead, but a dicknose...ha! Haha! Even funnier! And much easier to imagine when I get down to name calling now that I've seen this Penis Nose Mask. I wonder how many seconds it would take an onlooker to process that this big schnoz is actually a big cock schnoz when they first saw it. That could be an interesting Sunday Funday activity at the local Starbucks.

Did your chocolate melt in the sun? Naw, man, it's supposed to look like this. It's a chocolate butthole. Want one?

Edible Anus artisan, preservative-free Belgian chocolates are handmade in the UK. The company claims its brown star mold comes from a sphincter model whose trunk is as fine as the chocolates themselves. They believe their anus range of confections can "dissolve cultural boundaries of race, gender, class, and sexual orientation."

Well. They can certainly dissolve cultural boundaries of not licking an asshole in public.

Nostalgic art meets contemporary techniques - and DIY - in the woodworking plans for the Nymphaea 3D Wood Cutout. Who remembers the Magic Eye craze of the 90s? (Sit down, Gen Z.) These books of 3D optical illusions...