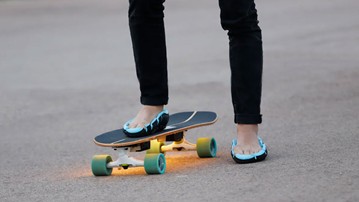 June brought with it the longest day of the year and the official launch of summer, so it's no surprise many of Dude's top products for June 2019 pertain to grillin' and chillin'.

And, like every other month around here, sex and Star Wars.

This June, though, the wildcard was Link Flip-Shoes, a puzzling pair of shoes that leave the top of your foot exposed like flip-flops, but "snap on" to your foot instead of sliding on with a thong between your toes. Check them out above, and in the list of Dude's top products for June 2019 below.

A 1,500-degree gas grill wouldn't be my first guess if someone asked what I thought a Beefer is. I'd probably go with protein powder or penis pump. But BBQ sensation whose ceramic gas burner can achieve temperatures heretofore unseen in conventional grills makes sense too. I also like that Beefer describes its 1,500 degrees F of heat output as "no warm breeze."

Point 65 believes in their KingFisher they have developed the world's first modular trimaran fishing kayak. Sure, why not? I doubt there was much competition out there to develop such a niche boat to begin with, but the fishermen amongst you might be pleased to see someone has essentially combined a Solo Skiff and a Pakayak. With the KingFisher you can enjoy your solitary casting time on the water without struggling to fit your vessel in your car or apartment.

At printing, this Seinfeld 30th Anniversary LEGO Set was just a LEGO Ideas project from Brent Waller. Meaning it needs around 10,000 votes from supporters before LEGO will consider turning Jerry Seinfeld's apartment, plus buddies George, Kramer, and Elaine, and arch nemesis Newman, into a real LEGO block set. Not that there's anything wrong with...

Michelin's Uptis tires are an acronym for Unique Puncture-Proof Tire System. They aim to bring airless tires, and in turn safer, more reliable travel, to both private and commercial drivers by eliminating the dangers and costs of flat tires and blowouts.

Non-pneumatic tires do already exist, initially created for military applications, and seen here before on the Polaris Sportsman WV850 ATV. So Michelin hasn't exactly, uh, reinvented the wheel with their Uptis airless tires. But they have engineered this particular design, partnering with GM to co-develop and research the tires as viable options for on-road passenger vehicles. They are looking to make Uptis tires available by 2024.

In this era of folks diving down the Reddit rabbit hole and watching entire episodes of Game of Thrones on the porcelain throne, Katamco developed the Toilet Timer "for the poo-crastinator taking their sweet time." And even during real emergencies, say, when you and your friend Cornelius both participate in the local fire station's Chili Eating Challenge and legit need the one bathroom in his apartment for 57 minutes, you gotta tag in and out, dudes. The sands of the Toilet Timer make the perfect referee, keeping you each to 5 minutes of bathroom destruction time per squat.

Yeah, dudes, I definitely think you can say you own a speed boat in your Tinder profile if you buy one of these inflatable party islands. It covers all the major speed boat bases: looks like a speed boat; holds 6 friends and a case of beer comfortably; moves. ... Slowly ... As long as the waves and current are doing their thing.

Gerber calls its Quadrant bamboo folding knife "a fashion statement with a function." So, uh, heads up dudes jonesing for a Queer Eye makeover - you can start with your pocket flipper.

The Quadrant has a finger flip mechanism for blade deployment and a frame lock to hold it in place while shut. While white G-10 composite is a handle scale option for Quadrant buyers, the standout here is the knife's bamboo version, complementing its straight edge sheepsfoot utility blade.

Link flip-shoes, a hybrid their makers call "free like a flip-flop, safe as a shoe," are here to prove you wrong about at least one thing: no matter what you thought about Crocs or Keen Uneek monstrosities, Redneck Boot Sandals or any other shoe on earth, up to this point, you had not yet seen the ugliest.

Need some summer headwear? Grab a Penis Costume from Cock Couture and head on down to the beach for some fun in the sun! Just don't forget the SPF 30.

And to follow the path to the sunbathing area where Teenage Mutant Ninja Dick and Captain Americock will be welcomed rather than arrested.

Is this an alligator or a crocodile? I can never tell the difference. Either way, one thing is for sure: float the alli-croc in your pool in Florida, or stick it in your pond in Toronto and people will believe that sh*t is real. Because sh*t like that happens, and sh*t gets real like that all the time now. Even in Canada.

Forget TIE Fighters, Kenneth Cobonpue is here to make loungers, not war. The award-winner Filipino furniture designer created his Star Wars collection as a reimagined universe where both the Dark Side and the Light come together to pimp out your home and office decor.

Why I Must Have Sex With You Checklist

Hmmm. Not sure if a Why I Must Have Sex with You Checklist clears the meter o' political correctness these days, especially since it's presented as a notepad that would sit perfectly on one's desk at the office. The requests and reasons (with accompanying check boxes) for why one person must satisfy another's horniness aren't dirty per se, but they are detailed, and could definitely create a "situation" if given to the wrong person.