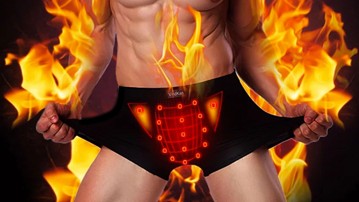 December was all about the Ho, ho, ho! The Happy New Year! This is...2020. And, like every holiday season, and every season in general around here, the Luuuuke! I am your father, and the Weeee! Boobies and crotches! Enjoy Dude's must see products for December 2019, the final month of the decade's finest holiday gifts, New Year's gear, Star Wars swag, and titillating tee-tee and pee-pee trifles.

Hints: 1) It's from Japan; 2) And honestly, that's all I know. Even after looking at the additional images in the listing, and the product in action, I'm still not exactly sure what is this thing.

Politically charged and controversial gifts for are the solution to everyone's holiday conundrum: how do I make tense times with my family, co-workers, and the UPS delivery guy worse?

Well dudes, here you go. Over a dozen suggestions ranging from presidents and governments to religion and relationships, all here to make your Christmas (or Hanukkah, Kwanzaa, or Festivus) gift exchanges a little more interesting. Enjoy my compilation of politically charged and controversial gifts for the holidays.

It may be lovely weather for a sleigh ride together, but I think I'm gonna sled solo on a Bobsla this time. And by "sled" I mean fly downhill and across the snow at speeds of over 20 MPH in this snowmobile / drift kart electric hybrid.

The Bobsla pairs a frictionless, sled-like front half with a pair of treads on the back, the latter powered 'round and 'round by a 12kW motor. At printing, Bobsla was marketing their e-snowmobile to ski resorts, as an alternative or additional option to downhill skiing and snowboarding, and a less expensive winter sporting good to own and operate than a fleet of snowmobiles.

For Commercial Sale Only ➠ Bobsla

The Party Game About Stereotypes seeks to capitalize on our current social and political climate for sure, but it also claims to provide a platform that will "help us learn about one another and ourselves, engage in useful dialogue, and most importantly, to laugh." I can just hear my Aunt Jan now: "I'm not racist, but I do think...." Or my wife's cousin Toby: "I'm sittin' Indian-style and I don't care what you libtard snowflakes have to say about it!"

Or my father-in-law to my wife: "Your firm struck gold with you, kiddo. A smart and qualified woman who doesn't just get pregnant and take leave 6 months out of every year." (Mother-in-law: "Sniff, sniff. But that's not to say we don't want grandchildren!")

On board, Baby Yoda is. And while the Baby Yoda drawn in this clever take on the Baby on Board windshield decals is nowhere near as adorable as The Mandalorian's actual Baby Yoda, I still appreciate the reference, and the application of this tiny beast that could melt a cold man's heart (maybe even brighten a wicked ex-girlfriend Karen's black one) to a product that I otherwise have no interest in.

The market is already flooded with hangover cures and preventions, but Toast! Before You Drink Gummies believe they can give booze the ol' Care Bear Stare in a brand new, much simpler, and more effective way. According to Toast!, "Before You Drink Gummies are designed to stop the body's immune response [to alcohol] from ever happening."

DMOS calls their Stealth Pro Snow Shovel "Your Excalibur with teeth." What a great line! Though it's also a double-edged sword (yuk, yuk, yuk) because Excalibur started out embedded in stone, and no man could pull it free but the rightful King of England. Given my past experiences shoveling snow with crappy shovels that get stuck in mounds or collapse under the weight of a good-sized scoop, I sure hope it doesn't take a King Arthur to brandish a Stealth Pro. This Excalibur with teeth better be enchanted for wielding by any old asshole.

The Micro TagBand skin tag remover is a tiny, low-tech tool for popping off bulbous mounds of excess flesh by way of slow strangulation.

To use the Micro TagBand, first load up the pointy piece with one of the skin tag removal bands. Cleanse the overzealous hump of epidermis in question with one of the included swabs, and then place the tool's cone end over it, flush with the surrounding skin. Use the L-shaped remover arm to slide the band from plastic body to human body, and there you go. Operation Skin Tag Asphyxiation is a go.

Some gifts are best left to Santa. But sexy gifts, especially sexy gifts for that someone special, those gifts are Baby Jesus territory all the way.

Like any of us could compete with the BJ in a gift-giving competition. (I'll let you read into that double entendre however you want.)