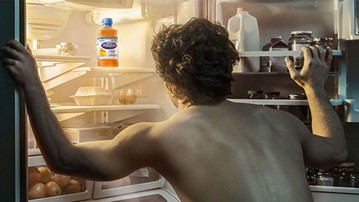 Why on earth would you need any sort of hangover cure, much less the best hangover cure? You can handle your liquor. You don't over-booze it. You don't drink Puerto Rican rum (anymore.) You-

Also known as the hangover.

For the headache that makes you wonder if you could maybe convince the campus health center to administer a Cortisone shot between the eyes, I always go with ibuprofen over other common painkillers for 2 reasons: 1) A doctor friend (a real one, not Cornelius in the lab coat he bought on Ebay) told me ibuprofen trumps naproxen here because the former attacks acute pain, while the latter deals better with aches and soreness that require extended relief; 2) A pharmacist once told me that my brain felt like it was about to explode out of my head and nose because alcohol swells the body, especially the sinus cavities. Ibuprofen has anti-inflammatory in addition to a painkilling properties. Aspirin does too, but I like my aspirin in Excedrin form, and that adds caffeine, which will just exacerbate the dehydration you're already experiencing.

For all of the other fun symptoms that accompany a rippin' hangover, here are a few more suggestions for the best hangover cures...or at least hangover placebos that might convince you you're feeling better.

Note: Hangover remedy prices are listed as they were at printing. Prices are subject to change.

Drinkwel - The Multivitamin for People Who Drink

Drinkwel calls itself "The MOST comprehensive alcohol health-related product on the market." It's a daily multivitamin for healthy people who partake in the booze, supporting the liver and nutrient replenishment with supplements such as milk thistle, reishi mushroom, vitamin B, and vitamin C. Drinkwel also says its pills are poppable for hangovers, with amino acids like N-Acetyl Cysteine present to help process alcohol-induced toxins and superfruits acerola, schisandra, and goji to help neutralize free radicals.

A Shark Tank especiale for the unwanted parasites of good times with alcohol: dehydration and electrolyte imbalance; GI horrors; blood sugar out-o-whackness; sleep disturbance; and cogeners / oxidants in the alcohol itself. Thrive + calls its After-Alcohol Aid "sunscreen, but for alcohol." So, yeah, it's best taken before drinking, as a preventative measure. The company reports those who do experience 50 percentage point reductions in next-day hangover symptoms.

"Take 3 capsules before drinking with food and water. Take another 3 right before bed." Ooooh, good advice. But before I drink I feel like Wonder Wom- uh, I mean, Wolverine, who doesn't need no stinkin' hangover prevention. And right after I wrap it up, I feel like my 2-year-old nephew, who has no sense of sensibility, and not much more motor function. So how's about I take my Flyby pills the next morning?

Flyby, like most other alcohol supplements, is best taken before and/or right after your consume, but with ingredients shown to help metabolize alcohol-induced toxins, and prevent hangover symptoms like nausea, dry mouth, and loss of appetite, if you're illin' on the flip side, a few morningtime capsules could help them Flyby.

For those who prefer chewing to swallowing. Zaca tablets are multi-purpose, intended to treat the fatigue, foggy head, and nausea that may ensue from exercise, travel, and high altitude, along with whiskey- and tequila-happy nights of overindulgence.

Most of the previous pill supplements I've included here tout their milk thistle and N-Acetyl Cysteine ingredients as primary preventers and curers. Zaca goes to Japan for inspiration in their formula, using Japanese raisin (Hovenia Dulcis) for hangover symptoms, along with glutathione for replenishing electrolytes.

Remember Warheads candy? Think of Japanese umeboshi plums as a slightly less assaulting version of those. Warheads Light. For those unfamiliar, the candy, and the plums, are sour. In Japan, they harvest the ume fruit at its highest acid level, and then salt-cure and ferment it for an unmistakably powerful, tart flavor. The first time you try one, your mouth might have a conniption.

But hang in there. Umeboshi plums have long been used as a home remedy in Japan, and even Samurai warriors toted them to combat dehydration, nausea, and hangovers. Ingredients naturally occurring, and resulting from the plums' natural preparation, include a host of acids, such as citric and pectic, known to ease body aches, and aid in liver function and digestion. The acids are also alkaline, like many antacids, and so can also help with upset stomachs.

If busting a move on the drinking floor has left you feeling like you're going to unleash a volcanic eruption of vomit, try...getting to the toilet as fast as you can. If the nausea is a little more mild and you're not into activating the ol' gag reflex, try some activated charcoal. It's been known to suck up a stomach's badness like a Dyson in an antiques store. If you have the wherewithal to pop a couple of the black pills before your hangover settles in, all the better.

Another doctor friend was the first to expose me to the hangover miracle that is Pedialyte. Like activated charcoal, it's best to take some, and try not to spill the entire bottle on the floor, when you get home from drinking, the bottle of concentrated electrolytes rehydrates shriveled prune innards the next morning too. And you thought the #1 Pediatrician Recommended Brand was just for diarrhetic babies.

Sober Up, a shot-sized beverage with a neoteric vitamin and mineral infusion, endeavors to reduce the negative impact of toxins, restore mental clarity, promote liver health, and naturally detoxify the body. It's packaged in a 0.75-oz metal tube packed with Eastern herbs and "Western beverage technology". I think that last part is code for, "Won't make you feel like vomiting any more than you already do."

Having tried Sober Up as part of a focus group containing two drunk people, I can vouch for these assessments. It tastes a little like Ricola cough drops dipped in soy sauce - presumably the flavor profile of its Asian voodoo plants - but goes down pretty easily, particularly when mixed with water or Bombay Sapphire.

Anchor bars look like your standard energy bar, packed with 20 grams of protein and other gym rat ingredients like almond butter and fiber syrup, but the real-food-only Anchors also contain what they claim to be a perfect, Harvard MD-formulated blend of vitamins and nutrients that fend off and fight back the undulating squalls of nausea.

This Memorial Day weekend, I will metabolize my alcohol without damaging my liver! I will take Toniiq Lingzhi capsules the morning after my nights of heavy drinking and address the underlying metabolic process that causes...

Does The Hungoevr Cookbook spotlight a small, yet decidedly porky hog on its cover because bacon is the ultimate hangover cure, or because it would also like to point out that those of us requiring a cookbook tailored...