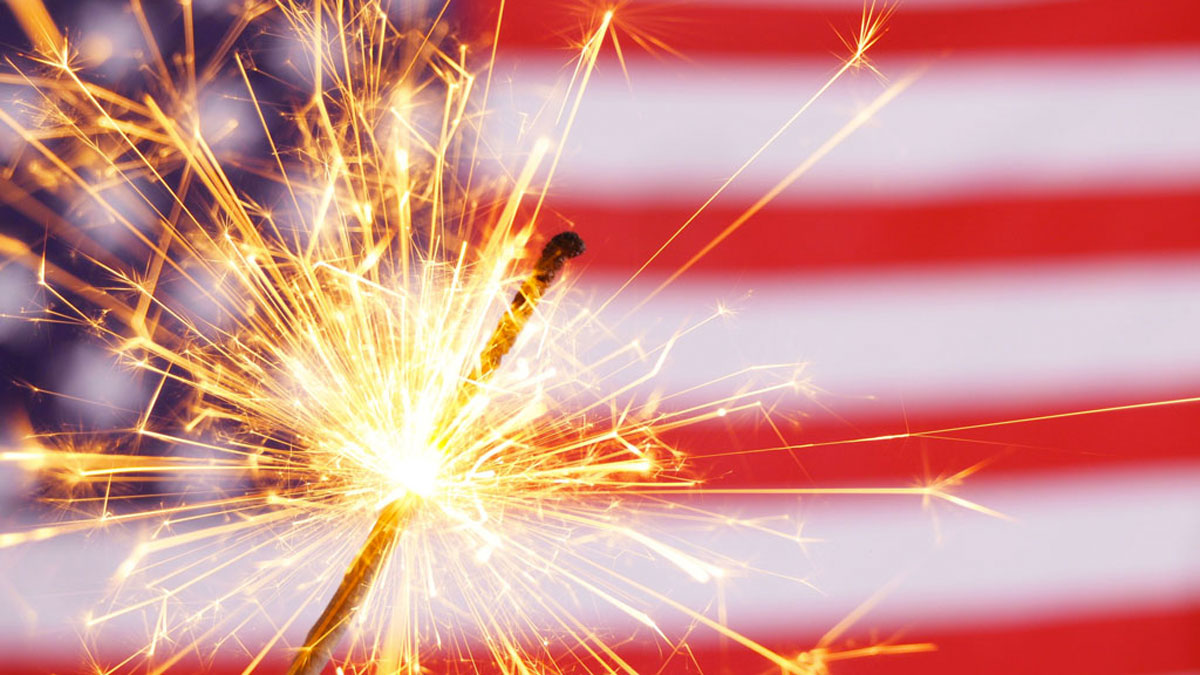 I'll keep it simple, America: Can I get an F Yeah?! Here are my picks for the Top 10 toys* to shoot, blow, or light up this 4th of July. (Note: All items' prices are listed as they were at printing. Prices are subject to change.)

*And by "toys" I mean "adult devices that should be handled with extreme care and without excessive alcohol consumption."

American Fireworks Displays $7 to $300. Rockets and cakes and candles, oh boy! They ship by freight and can't deliver to all states, so check policies and get orders in by June 25th to get your (safety-conscious) hands on everything from drugstore sparklers to real deal 500 gram cakes.

Fireworks Firing System & Wireless Remote $67. Amazon won't sell you fireworks cakes with free shipping, but they will pass along this device you might find handy in ganging up and detonating 2015's blazing rain of color. The 12-cue system comes with a remote control and 12 x igniters.

X15 Flamethrower $1,600. People typically use flamethrowers to clear brush. And just like that, for the first time in my life I cannot think of anything I'd rather do today than go clear me some brush. Better than a firehose and almost as badass as a Ghostbusters proton pack, this legit, ready-to-use X15 Flamethrower is ripe for the getting to anyone who's got the cash to pay for it.

Pyro Open Palm Fireball Shooter $175. Magician Adam Wilber has spent 2 years perfecting the Pyro, a high-tech professional tool that will turn its trained subjects into Marvel superheroes or Fire Marios as they unleash real rolling flames from the palms of their hands. Ahhh, and I thought mylightsaber handle flashlight left the ultimate impression on LARP night. The Pyro unit contains 4 separate chambers, individually triggered for multiple shots, and with each detonated by a simple remote device. Fireball kindling is found in Flash Packs, flash cotton and paper sets that each contain enough "ammo" for 50+ uses.

Mystical Fire Campfire Colorant $11. These packets turn all wood-burning fires (the ones in your living room included) into a circus of colorful flames. Amazon reviewer CVTuckster suggests using more than one pouch at a time for larger fires, and notes they should be laid stably on a log, as functionality is dependent on their chemicals melting and adhering to the wood. He reports the ensuing rainbow light show effects last 15 to 20 minutes. Note: CVTuckster is only a Mystical Fire consumer, not an employee of the manufacturer, and could be lying or not know what he's talking about. But I believe everything he says because anyone named Tuckster has got to be a pimp.

40,000 Cubic Foot Smoke Grenade $15. Use the Haze Pro Professional Smoke Grenade for emergency training drills. To create realistic disaster scenes or dramatic entrances in amateur movies and at parities. As a smoke screen during Airsoft and paintball battles. Or, most practically and best of all, detonate its 40,000 cubic foot wall of opacity on the neighborhood block party this 4th of July. The grenade is a US-made professional unit classified as both non-Hazmat and non-explosive. In other words, you don't have to be 18 or make an illegal purchase on the side of a road in Eureka, MO to get your hands on a stash. Much like myself, once the grenade is ignited it blows its 40,000 cubic feet of smoke out of both ends over the course of 115 to 120 seconds.

Pit Barrel Cooker $300. Like a smoker mashed with a Crock Pot mashed with a 55-gallon barrel of lube. With charcoal and meat in place of the lube. The self-described "vertical cooking experience" says it will heat and flavor perfect hunks of meat over shorter cooking times without the regular monitoring inferior setups require for temperature and smoke regulation.

Grandma. Courtesy of an Angels Flight cremation ash fireworks display. $5,500. Out with a bang indeed. Angels Flight's sunset fireworks displays put the memorable in memorial service, commemorating recently-passed loved ones with spectrally brilliant explosives made from their cremated remains. Trained staff load over 200 specially modified fireworks shells with the designated ashes, which a licensed yacht then releases over the waters surrounding California's coast in a choreographed, kaleidoscopic display of fire and smoke.

Volcano Vaporizer $479. I don't know about you, but I need a little more than fireworks to get me high as a flag on the 4th of July. I'd rather watch someone else light them while I sit back and light the Volcano, the Mt. Vesuvius of herbal apparatuses. Uh, in the erupt and chill you out kind of way, not the erupt and create mass chaos while killing thousands of people one.

Though cost prohibitive to the marijuana-partaking masses, the Volcano is generally regarded as the best, and by some The Only, vaporizer currently available. Plug in its large triangular base to heat inserted herbs, spices, or essential oils, and then extract their life force into polyester balloons. Vape by using your mouth to depress the balloon nozzle and your lungs to inhale the super smooth, super potent magic.

And I thought cheese curds and Heather Graham were the best things ever to come out of Wisconsin. From the humble city limits of East Troy, Erik Buell is releasing his first big production motorcycle under the Erik Buell...

Take your lady on a trip to Paris this year. Or maybe Stockholm. Edinburgh. New York. I hear Charleston is nice. Or if leaving town isn't in the budget, bring the great cities of the world to her...finger. Ola Shekhtman...

Did you know that poultry cannot be potty trained? Of course you did. It's why your pet duck Precious keeps peeing on your couch and quacking out poos on every rug in the house. Not to mention that, despite every movie...