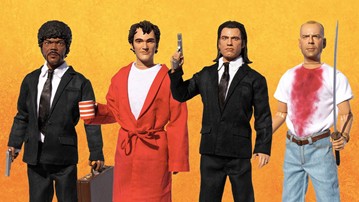 If you were groovy in the 70s, gnarly in the 80s, or dope in the 90s, these 18 throwback gifts are for your own nostalgic self.

I bet I know what's been missing from your Christmas mornings: profanity. Lots and lots of profanity. And also Quentin Tarantino (which might explain the lack of profanity). Well guess what, dudes, thanks to toymaker Beeline Creative, the gaping hole in your motherfucking holidays is about to get fucking filled. Talking action figures from 1994's Pulp Fiction are here, and they are pimped out with movable, posable joints, trademark accessories, and all your favorite F-bombs from the film.

I have 3 words. F. This. Game. Whether you are a naturally jittery and unstable person, or as chill as Keanu Reeves, here's my advice: pass right on by this opportunity to introduce, or reintroduce, yourself to a bed of exploding plastic Lucky Charms from Hell.

That said. If you insist on showing off your Perfection skillz, I recommend you level up and play Social Distancing Perfection: before you start the timer, lay out every one of the tray's shapes at least 6 feet apart.

It may take the sun to bring your guns out, but Schwarzenegger's here to flex his bad boys come dumping rain, sideways sleet, or blizzard of snow. Courtesy of House of Grafix, you can plaster Arnold in His Prime across your car's rear windshield, installing the majority of his bulging Austrian muscle as a decal on the window's interior, but zip tying a hard plastic cutout of the forearm-to-fist segment onto your wiper outside. That way, when it rains, Arnold pours. It on.

Who remembers the CASIOTRON? Casio's 1974 release of the world's first digital watch with an automatic calendar. Well, also looking svelte and cutting-edge in that chunky, throwback sort of way is the timepiece magnate's Databank Calculator Watch. Time, date, 1/100 second stopwatch, and basic mathematical functions--what more does one need to wade through the murky waters of life? Also, it looks like it came straight to 2020 from an Anthony Michael Hall movie, so bonus points awarded there.

If you're not digging the neon pink retro fanny pack hat, not to worry. The 80s / 90s throwback headwear comes in almost two dozen different colors and styles, all with the money pouch (literally and figuratively) stitched in and zippered up across the front.

See, if you stick to flip-open A-Z address books and tin cans connected by string they can't track you or steal your data!

I must admit, nostalgia sets in hard when I look at Home-X's retro style flip-open A-Z address book. My grandma used to have one that I loved to, as you might guess, flip open. And then push shut. And then flip open again. At age 6, I had only a vague sense of the information stored inside the address book, and zero appreciation for its clever design.

Better put away those lobster-crushing man hands before you handle this forthcoming Seinfeld Set Replica. At 16-1/2" wide x 11-1/2" deep x 6-1/2" high, Jerry's miniaturized apartment contains over 100 hand crafted, authentically reproduced elements from the show, including the furniture, wall-mounted bike, light fixtures, and operational front door. (But you'll have to 3D-print your own Kramer to bust through it.)

On the surface, putting a diaper on your luggage doesn't sound that 90s retro badass, but when the diaper looks like a Nintendo Game Boy? That's a luggage diaper - OK, luggage cover - I can see sort of see sliding over my roller bag.

I still say "sort of" because I'm not really sure what the purpose of any kind of luggage cover, Game Boy or otherwise, is aside from making your suitcase stand out at the baggage claim and communicating your coolness to other travelers, airline employees, and baggage handlers.

One of the best toys of the 80s you can still buy - and buy in bulk! - this dirty dozen of Koosh arrives as a multi-colored set of 3" balls. In addition to cheap gifts and party favors, parents, teachers, and therapists have also had success giving Koosh Balls to kids with autism or ADD for sensory stimulation and / or to calm and focus them.

While not nearly big enough at 23 white and 7 black cards, the Cards Against Humanity 90s Nostalgia edition expansion pack shows a little bit of love for the Gen Xers and Millennials out there yearning to revisit the days of yore. It's perfect timing, as Millennials yearn because the decade of the 90s was a simpler time, when they lived with their parents and ate Happy Meals by choice, rather than because shriveled-up baby boomers who refuse to retire are hogging all the good jobs and real estate (the latter of which they either leave empty for weekend use, or rent out as Air B&Bs).

Handmade by Nancy's Jars, these retro VHS Cassette Lamps have found a VCR-free way to bring your favorite films in your favorite format back to your living room. The lights come in dozens of different movie titles, from Alien above to Top Gun, Star Wars, and The Big Lebowski, or you can make a custom request for one you don't see in the shop.

In addition to films, Nancy's Jars can repurpose a VHS cassette into a glowing band, actor, or personalized photo lamp.

Lamps are fitted with LED lights, the color of which you can choose from a neon set of 8. All VHS cassettes are battery-powered, but you can also pick whether those batteries are AA, or rechargeable USB.

The Grin & Share It High Heels are part of a whole line of Care Bears shoes, stockings, and accessories made to bring levity and smiles to the world at a time we could all stand to "turn that frown upside down." The furry toe of the right shoe features Grumpy Bear's face and the left Good Luck Bear. The heels are shaped by Tenderheart Bear and Cheer Bear respectively.

Yippee Ki Yay! A Die Hard Christmas: The Illustrated Holiday Classic is going to be on every kid's man's gift list this year. (Kids probably won't want it. They'll think the John McClane brand of killing and violence is too sweet and pastoral compared to their Call of Duty campaigns.)

Written by Doogie Horner in the brilliant poetic style of "The Night Before Christmas", and illustrated by JJ Harrison in the bloody poetic style of the machine gun- and German terrorist-laden Hollywood action flick, A Die Hard Christmas follows McClane's heroic efforts to save a group of hostages taken at his estranged wife's Christmas party. And also win back his estranged wife, and get them both home in time for Santa.

The Mac Classic just never stops being...classic, does it? Shargeek's Retro 35 Mini is an obvious, albeit not obviously stated for licensing reasons, reimagining of a yesteryear Apple Macintosh into a 35W USB-C charger...

When you spill your Coca-Cola, clean it up with...more Coca-Cola! Yuk, yuk, yuk. This Coca-Cola Vending Machine Paper Towel Holder is fronted by a 1950s-era Coke dispenser that would make the perfect nostalgic gift for...

While the Nokia 6310 has always been a brick phone rather than a flip phone - and you know how I love me some flip phones - Nokia's 2021 upgraded rerelease of this mobile classic still sends my heart aflutter. Dudes...

While a Pac-Man Ghost will definitely eat you up the first chance it gets, the little villain appears to be very protective, and equipped to take exceptional care of your houseplants...