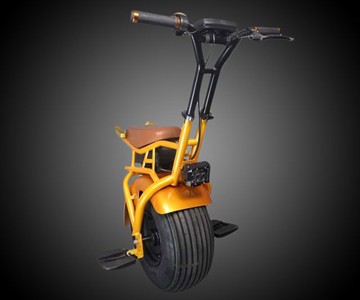 Uno, dos, tres...Bolt! You won't go 0 to 60 in 3.5 seconds - or ever - on the Uno Bolt, but you will have the privilege of scooting away lickety split from the lady who caught you helping yourself to her plum tree (hey, it was in the parking strip!) on the world's first e-unicycle with gyro force technology.

The Uno Bolt has built-in stabilizer sensors, same as hoverboards and standup single wheel transporters, but its designers say their e-uni's is "the quickest responding gyroscope to be put into a one wheel machine." Driving and navigating are controlled by the tilt of the rider's body: lean forward to accelerate; backward to slow, brake, and reverse; and right or left to turn. If you've got the bowing power, the Uno Bolt has the battery power to roll you up a 45-degree incline.

While it may look like a circus accessory, at 45 pounds, the Uno Bolt isn't for clowns. It's not going to be a snatch-and-throw-over-your-shoulder kind of commuter when the sidewalk is too busy to ride it for several blocks, or you need to run to catch a bus. On the upshot, maybe you won't need to do either of those things seated comfortably on the Uno Bolt, tooling along at up to 22MPH over a range of up to 25 miles per charge. Combined with its hill-climbing capabilities, that's a pretty self-sufficient ride.

The Uno Bolt has a removable battery and 4.4AH charging for wall charging in a standard outlet. A full charge, they say, takes only 45 minutes. Additional tech on the e-unicycle includes an LED head display with readouts of battery status, speed, and trip mileage, and a temperature sensor. For those of us still sensitive to recent history's Spontaneously Combusting Hoverboard phenomenon.

The Uno Bolt seeks crowdfunding on Kickstarter through September 9, 2017. And I gotta say, despite its December 2017 expected ship date, I have my doubts we'll see this thing anytime soon. Only because another one-wheeled e-wonder, the RYNO, showed us their prototypes in 2012, but have yet to reach mass, or any, distribution. At printing all their website was offering was newsletter signups for information about pre-ordering. Your call on the Uno Bolt though - it's a $1,000 risk if you back early.

Tramp not included. The Indo Trick Trampoline Scooter is a wheelless board-and-bar design made to help scoot enthusiasts practice freestyle tricks, plus come up with new ones. I'd say it's a safer way to learn Triple...