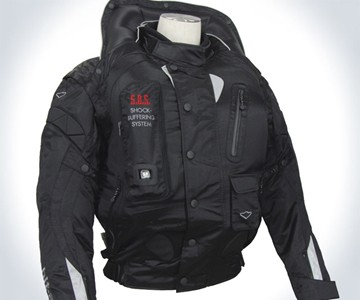 As with those in cars, presuming Airbag Jackets' inflatable impact absorbers don't spontaneously detonate while a biker is cooly cruising the local strip checkin' out who is the what is the what some fine evening, the personal safety innovations should earn high marks with anyone who rides a motorcycle and is into walking away from crashes without major spinal cord or internal organ injury.

Airbag Jacket maker SaferMoto points out that a helmet has crucial restrictions when it comes to safeguarding a rider who has been forcibly disconnected from his or her bike. Their jackets step in to pick up the slack with an air-driven protection system triggered by a key mechanism that attaches to the motorcycle itself--similar to the way in which a paratrooper's parachute tether line attaches to the aircraft. When the paratrooper jumps, his parachute automatically deploys. And if a rider "jumps" due to unanticipated turns of events, so too does the Airbag Jacket ignite and inflate within milliseconds, while still in the air, so the hard reintroduction to the ground proves not to be as detrimental as it would even if s/he were wearing high quality leather, padding, or other tactical bike gear.

Airbag Jacket technology is based loosely on that of a car's airbag system in that it utilizes a CO2 cartridge, but deviates because a new CO2 cartridge is all a rider needs to repack and reset the jacket after it deploys. Also, SaferMoto promises the Airbag Jacket CO2 system doesn't come with unsafe side effects, such as accidentally breaking the neck of and killing the person it is meant to be saving. While no AdrenaSuit, or even Dark Knight Rises Motorcycle Suit, the jacket seems to be a pretty alright way to ensure that if you wreck your bike, it is only the bike that you wreck. In other words, it checks yourself before you wreck yourself.

SaferMoto's air armor line includes 8 different jackets. One is specifically for women, and one marketed to equestrian riders. The others feature various designs, colors, bulks, and breathabilities.