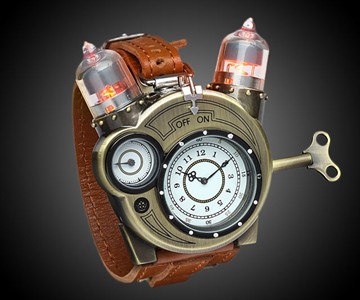 Induction motors, X-ray experimentation, the world's first RC boat. Nikola Tesla's contributions to the world were numerous and thrilling during his nearly 6 decades of scientific pursuit in New York. So it's strange that he fell into oblivion after he died in the early 1940s, and it was his early employer, Thomas Edison, we all learned about in elementary school for the next 50 years.

But the Tesla train eventually came around again. In, I'd argue, an even bigger way given that nobody names coils and coveted cars and, in this case, watches after Thomas Edison. Think Geek's steampunky Tesla Watch combines weathered brass and a pair of faux vacuum tubes with a thick, layered leather strap. The tubes contain red LEDs wearers can turn on and off by flicking an arrowed switch at the top of the watch between the words "On" and "Off". Ahhh, scientific brilliance. No question this is a Tesla watch.

Additional watch features include ornamental winding keys that store in the watch band, a Japanese analog movement, and a 304 stainless steel case housing it. The watch's total diameter is 1.6", and the piece is 2.7" tall, including its vacuum tubes. Set it to run 15 minutes fast and you too can be like Tesla: ahead of your time.

Dudes, do you feel time passing by? No? Well. You're either too young, or you've never touched a magnetic ball bearing watch before. The first one I ever saw, the Bradley Tactile Watch, was originally made with the blind...