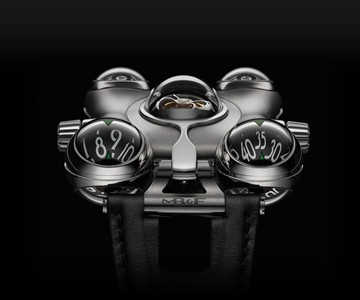 You gotta have some balls to call your watch an "horological machine" and charge over $200 grand for it. And MB&F's HM6 Space Pirate is definitely a watch with balls. Five of them, to be exact. The timepiece's transparent central dome, home to a 60-second flying tourbillon, even has a retractable shield to protect it from UV radiation and further suggest its biomorphic sci-fi design merits equal parts awe and eye rolls.

MB&F has limited HM6 Space Pirate Watch production to 50 numbered pieces because it takes extreme precision and craftsmanship to create watches that can "operate in the hostile environment of space: the space on your wrist." (Yuk, yuk, yuk. Glad to see they're pairing circa 1970s sci-fi humor with their circa 1970s sci-fi design.) The four corners of the HM6 case contain transparent sapphire crystal domes at the tops and bottoms of their 360-degree spheres. At the front, the 2 semi-spherical indications rotate vertically to present hours and minutes, and out back a pair of spherical turbines spin horizontally to regulate the watch's winding system.

This Space Pirate did not pack lightly for its trip either: a transparent cupola on top of the HM6 and sapphire crystal display portal on the back reveal many of the 475 components making up its movement. Components that took MB&F over 3 years to perfect. So despite my cracks at the watch's extravagant and ostentatious nature, I will grant that these guys are legitimate time lords and their Space Pirate a formidable piece of terrestrial time tracking.