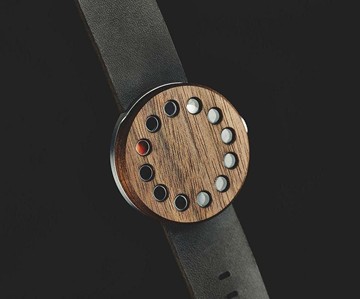 Grovemade says its forthcoming wood watches will encourage wearers to look at their smartphones less, and I basically agree with that statement. I mean, on the condition that Rosie Huntington-Whiteley isn't on my smartphone screen. In a provocative outfit. Then I'd still probably go for the smartphone, even if I came away from it still not knowing the time.

Otherwise though, the Grovemade Wood Watch has no competition. Crafted in either Oregon Claro Walnut or Eastern Hardrock Maple, the timepieces' faces have 12 windows signifying standard clock points, and color block "hands" on their Japanese movements that reveal themselves to denote the current hour and minute.

Other Grovemade Wood Watch components include a stainless steel core and domestic vegetable-tanned leather straps. Both the Walnut and Maple woods come in either round or square face shapes. Available for pre-order at printing, Grovemade expects its Wood Watches to ship at the end of 2014 or early 2015.

On a final note, I just had an idea. For Rosie Huntington-Whiteley. Or any really hot girl for that matter. You should take video clips of yourself speaking every possible hour and minute combination and then turn it into some sort of Hot Girl Clock app for people like me. So when I click on my phone's screen to see that it's 12:47, I'll also see you...in a Wonder Woman costume...or nothing...breathily murmuring, It's twelve...forty...seven.