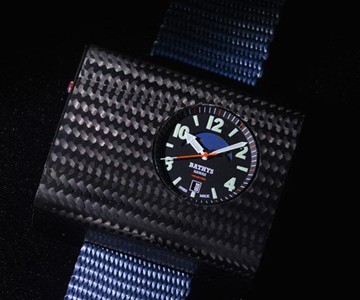 $6k
from Bathys Hawaii Watch Co. »
Check It Out

What's so special about an "atomic" wristwatch paradoxically struggling to work itself down from prototype sizes as big as the wearer's wrist? Well. In tracking time, it loses just 1 second every 1,000 years. Because its foundation is a self-contained cesium atomic clock. And it needs no radio signal from the US Government to keep proper time, and it's actually even more accurate than the satellite signals that beam hours and minutes to our phones and other devices. Bathys Hawaii's Cesium 133, named for the most stable isotope of cesium, is basically The Most Accurate Watch in the World.

And Bathys will make only 10 of them. Company owner John Patterson had planned to offer the first 6 at $6 grand a pop on Cesium 133's Kickstarter crowdfunding page. Last night, in disbelief that all 6 were claimed within days, Patterson issued an update stating he has decided to put the remaining 4 on the pledging block as well. So if you've got the cash and the inclination lying around, act fast and you too could be a rare owner of an encased atomic wonder able to function at unprecedented levels of temporal accuracy.

Designed by Patterson and George Talbot, the Cesium 133's single time-producing chip/oscillator houses a laser, a heater, a sealed cavity of cesium gas, a microwave filter, and a photodiode detector. These components work together to count hyperfine lines of excited cesium 133 atoms--1 second is divided into exactly 9,192,631,770 vibrations of a cesium133 atom--thereby producing time calculations in the exact same way the National Institute of Standards and Technology (NIST) does. Again, this is a completely self-contained atomic watch, and it is precise to the second, with no more than a 1 second loss per millennium. The prototype, shown in the metal cases in the above photos, is powered by rechargeable li-ion batteries, with time displayed on an analog clock face with moon phase indicator. Its size: a honkin' 2.4" x 2" x 0.9".

But that's the original prototype. A 2.0 version modified the watch's shell to a carbon fiber case, as depicted in the featured photo, which reduced both its dimensions and weight, the latter down to 3.1 ounces, or on par with a non-atomic, non-awesome wristwatch. Sketches for the Kickstarter edition of Cesium 133s envision a 3D-printed stainless steel case, with weight reduction techniques used to bring the piece to the slimmest and lightest point possible.

Get in on the atomic frenzy by pledging for one of the last 4 Cesium 133s by May 9, 2014. Bathys Hawaii is also offering up some of their other timepieces to backers interested in funding the project.