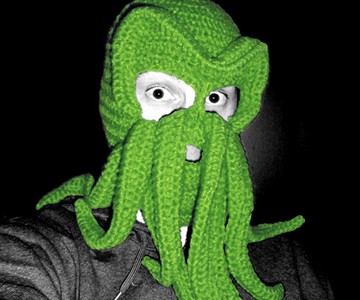 When it's cold on the slopes, the only thing better than wearing a toasty warm ski mask is wearing a toasty warm ski mask whose Lovecraftian green tentacles scare the ever loving shit out of fellow downhillers. The Cthulhu Ski Mask, a successful Kickstarter project-turned-salable-commodity by Toy Vault, Inc., with design by Dianna Jorgensen, brings the evil old one from the murky depths of R'lyeh to the eager surface of your face. Synthetic yarn gnarls and locks to manifest an ominous browbone, and cascading mess of creepy extremities measuring 10" wide, and 19" tall from crown to tip. One Cthulhu size, Toy Vault notes, "devours all".

And now, an interlude.

Cthulhu: An Ode of Rising Panic and Snowballing Psychological Breakdown

A horror of the ocean
And a haunter of the mind
Imprisoned in our psyches
To pleas of mercy he is blind.

When he rises from his slumber
He'll slaughter all ye lambs
He'll torment and he'll gut you
Like a serving of bad clams.

As his tentacles unfurl
He'll wield his burly mass
From the depths of your subconscious
Dude. Cthulhu's comin' for yo' ass.

Green Cthulhu Ski Mask supporters receive their harbinger of the watery abyss for $24.99, while those requiring a dark purple set of tentacles can have it for another $10. ToyVault also sells other Cthulhu-themed accoutrements, such as a Cthulhu Wreath, a Cthulhu Hand Puppet, and a My First Cthulhu plush toy for the kiddies.

Sweeeeeet! I was wondering how I could pull off being a spoon for Halloween. Like mirrored sunglasses, the No Face Mask's outer film has a chrome effect that renders your mug invisible to onlookers, but keeps theirs in...