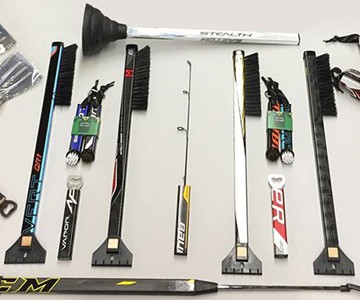 America may not be rife with hockey fanatics like our Canadian compadres, but Hat Trick BBQ still has pretty much all of English-speaking North America covered with their recycled hockey stick grilling utensil sets. Because even if you don't like hockey, you probably like barbecued meat. And if you don't like hockey or barbecued meat, then you almost definitely like recycling. Icy bloodsport enthusiasts, grill buffs, and tree huggers alike can join in the use of Hat Trick's mean, green, hockey-themed BBQ sets.

With bases in both the US and Canada, Hat Trick BBQ accumulates broken hockey sticks scheduled to be euthanized in landfills, and gives them a second chance at life alongside a Weber. Repurposed sticks come from over 60 hockey clubs in the NHL, AHL, and NCAA; to date, Hat Trick BBQ has converted over 12,000 of them into 3- and 5-piece grill sets, plus a line of bottle openers.

The 3-piece BBQ Set includes tongs, a spatula, and the buyer's choice of either a brush or fork. Expanding to a 5-piece set will get you both the brush and the fork, a bottle opener, and a replacement brush piece. At printing, Hat Trick BBQ was also offering a limited edition USA NTDP 3-piece set in red, white & blue.

Hat Trick BBQ notes that most hockey sticks they transform into grilling tools have been previously used in a game and, as such, may have minor imperfections, such as scratches or nicks.

For hockey players and skaters, these skateable synthetic ice tiles are a step up from those back-and-forth slide boards you have to wear shoe booties to use, but still a step down from EZ Ice</