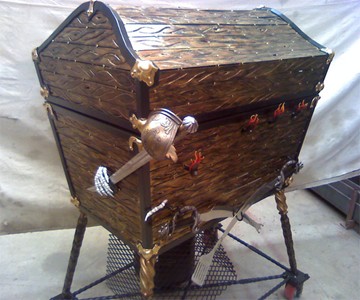 Meat. Gold. In my mind they're one in the same. And with a treasure chest shaped BBQ no one can give me shit anymore about yelling, Harrr! Who wants a hamburg-harrrr?! Well, they can, but I'll be justified in continuing to do it and they'll be the ones to look like wet blankets for not joining in the pirate-themed fun. From grill master Randy McKnight, likewise purveyor of the Colt .45 BBQ Grill, comes this conversion of an antique wooden pirate's treasure chest into a "Captain Bloody Bills" BBQ.

Provisions for (pork) booty access keep to the pirate theme with a sword lever spanning the front of the culinary swashbuckler for lid lifting and lowering. Inside lies a 3-burner grill chamber and single burner hot slather simmerin' oven. The treasure 'cue also has auto ignite burner controls, space for a 5 gallon fuel keg on its lower shelf, and heavy duty swivel casters for parading the grill up and down your block and sticking it to the Joneses once and for all. In your Blacktop 360 Party Hub Grill's face, Bob Jones!

Included with the treasure chest grill--and hopefully themselves made of gold given the BBQ's steep price tag--are a pair of boarding swords both for flipping your meat and defending it from sticky-fingered Goonies.