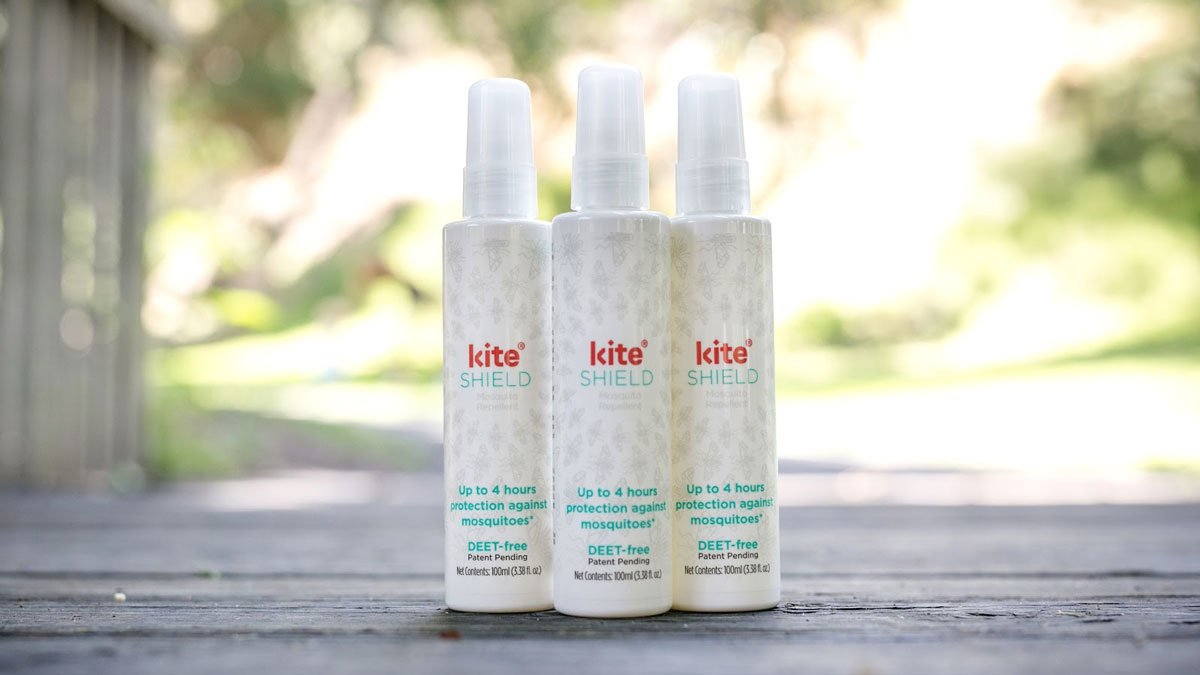 Three years ago Kite launched a crowdfunding campaign for their mosquito patch, a 1-1/2", non-toxic skin stick-on that blocks mosquitos' ability to track and detect humans for up to 48 hours. Since most people don't care for swatting bugs and clawing itchy chunks out of their own legs during leisure activities, or dousing their bodies in chemicals to preclude it, the Kite Patch's fundraising efforts were hugely successful.

However, at the time Kite was still in the research phases, and had an estimated 12 to 14 months of trials to go before they could produce the patch and start shipping to backers. And 12 to 14 months might have doubled or tripled since then. Now Kite anticipates having the patches perfected for delivery in Q1 of 2017. In the meantime, they've used their mosquito-derailing Patch formula to create Kite Shield, a more familiar looking bottle of liquid repellent that Kite says still fights bugs differently than anything else you've used before.

The Kite formula is natural, DEET-free, and safe for both users and the environment (and therefore able to bypass the EPA's approval process in production.) But unlike citronella and the old-lady-perfumey Avon Skin So Soft my grandma used to rub all over me as bug spray, Kite says its Shield is actually effective, lasting for up to 4 hours per application, and safe to reapply every 2 hours without freaking out your skin or making your pee turn green.

The 3.38-ounce bottles of Kite Shield are available for direct pre-order for $15 (early bird) to $20 on IndieGoGo. They should ship out this month as well.

This 2 oz. bottle of Luminol contains the exact formula used worldwide by Crime Scene Investigators. The way you get its blue chemiluminescence to show is simple. 1) Bleed all over something. 2) Clean it up. 3) Spray...

Are you ready for continuous mist? That's right, Continuous. Mist. Because that's what this spray bottle offers. CONTINUOUS MIST. The texture? Oh, it's ultra-fine. Yep, just when you thought life was getting worse, something...

Wait. Aren't praying mantises hot, yet evil, women who devour men like Xander Harris in that one episode of Buffy the Vampire Slayer? And does that mean you're telling me I can purchase and hatch between 50 and 200 women...

Suck it, bloodsuckers! The Biogents Mosquitaire CO2 outdoor mosquito trap is a scientifically-researched, German-engineered solution to bug bites, and their ruining of your backyard BBQs and summer evenings on the patio...

Methven's Aio shower head uses Aurajet technology to widen your wetness and deepen your experience with your water fixture every time you turn it on. The company says the Aio aims for no less than "maximum body contact...

The Black+Decker Bug Zapper is an insect killer that looks as handsome as the house flies, mosquitoes, gnats, and wasps it bzzzzt!s will look nasty lying dead in a pile in the zapper's collection tray...