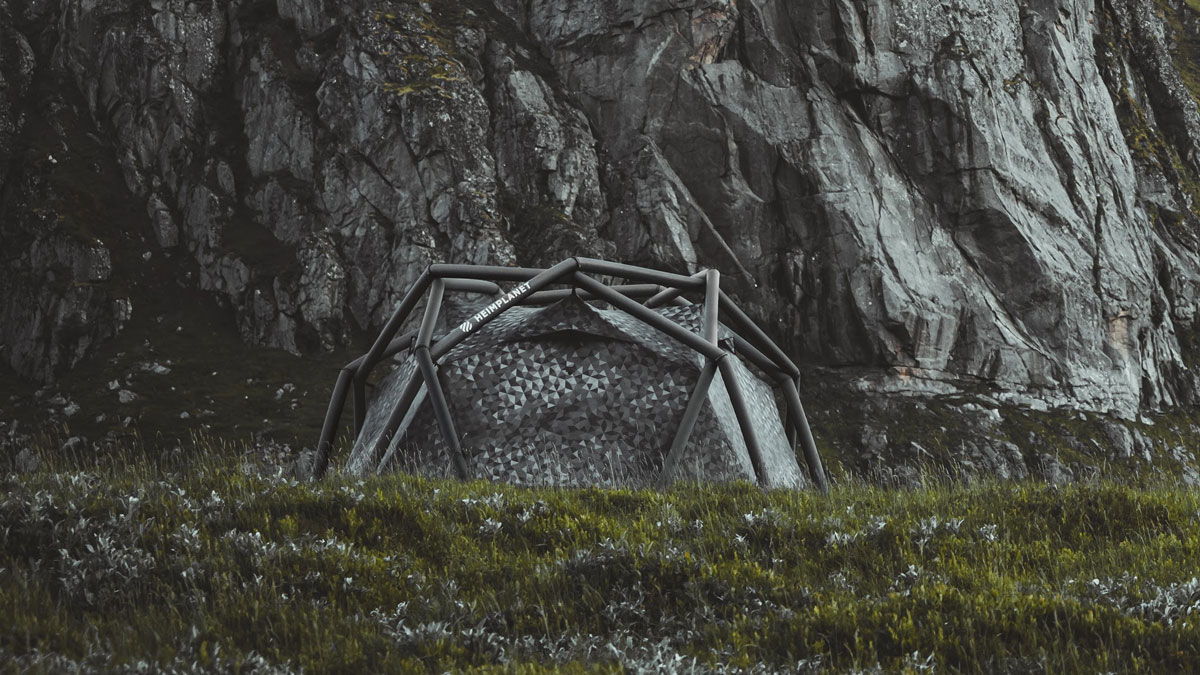 I knew Heimplanet would be releasing the newest addition to their Cave Tent line, the Black Cairo Camo Cave Tent, on July 23, and felt pretty sure it would be the most stunning black and camo thing I saw all day. But then, during my wakey, wakey perusal of my news feed, I saw this photo of a panther shadowing his leopard mate. Holy crap is that incredible! Sorry, Heimplanet, the Black Cairo Camo Cave Tent just got overshadowed by a black panther shadow.

On the upshot, I think your rock-and-night-mottled tent would be the perfect one for the cats' photographer, Mithun H, to take hidden shelter in during his expeditions.

Heimplanet developed the original Cave years ago. It was the company's first inflatable tent, one with a standout geodesic dome design whose Inflatable Diamond Grid "exoskeleton" holds the air and allows the tent to pitch in less than a minute with a pump. Individual grid chambers can also be isolated from the rest of the system to ensure continued stability if one is damaged, and make it easier to repair or replace.

The Black Cairo Camo Cave brings a new look to the tent, as well as new possibilities for outdoorsdudes and ladies to become one with their surroundings. It comes with a waterproof Ripstop Polyester flysheet and a breathable Ripstop Nylon inner tent, and has multiple storage compartments. The Black Cairo Camo Cave Tent is a Heimplanet limited edition.

It's what's on the inside that counts, right? The Crua Culla Maxx is a temperature-regulating inner tent that keeps you warm while camping on cold nights, or cool while camping on warm ones...

Snug as a bug in a...Snugpak Stratosphere 1-person bivvy shelter. Stable, warm, mosquito-free, and ready to pack out at a moment's notice too. The Stratosphere aims to be a full-feature tent, without a tent's size, weight...

That Kammok's Crosswing car awning takes just 3 seconds to deploy isn't even its most impressive attribute I don't think. For me, it's seeing the sunshade fully extended and ready to block UV rays without a single support...

CARSULE - Pop-Up Cabin for Your Car

Camping. Picnicking. Romancing. Or just chilling. The CARSULE is a pop-up cabin for your car whose possibilities are limited only by...well, what you can do in a 6.5' cubic space extending from your SUV, minivan, or hatchback...

I see your bivy sack, and raise you the Terra Nova Bothy Bag, a lightweight emergency shelter erected and held in place by your own body weight and form. Or rather, your own and your friend Cornelius'. Or, given this...

I recently learned a new word from my girlfriend, She-Ra: Princess of Power, and although I swore I would never use it, it's all I can think of when I look at these canvas tents from Lotus Belle. The word is "glamping."...

Here's a tip about stingrays: if you fear getting slapped or impaled by one while walking across the ocean floor, shuffle along the sand instead of taking normal steps. Rays like to lay low, and your disturbance of the...

I used to climb on a structure shaped like HEIMPLANET's Cave on the playground when I was kid. The Dome of Death me and Cornelius and Victor called it, on account of our attempts to knock off anyone who tried to use it...

Ahhh, the Tentanic is cruising towards shore just in time for both camping season, and the 3D re-release of Leonardo DiCaprio's most humiliating 3 hours on the big screen. A 1:2 scale replica of the luxurious Titanic...

Be the pillar of your next camping trip with the MONOLITH tent and hanging shelter. Especially if you prefer to sleep alone, or no one wants to share with you after you become Snorey McSnorerson from some expedition whiskey...