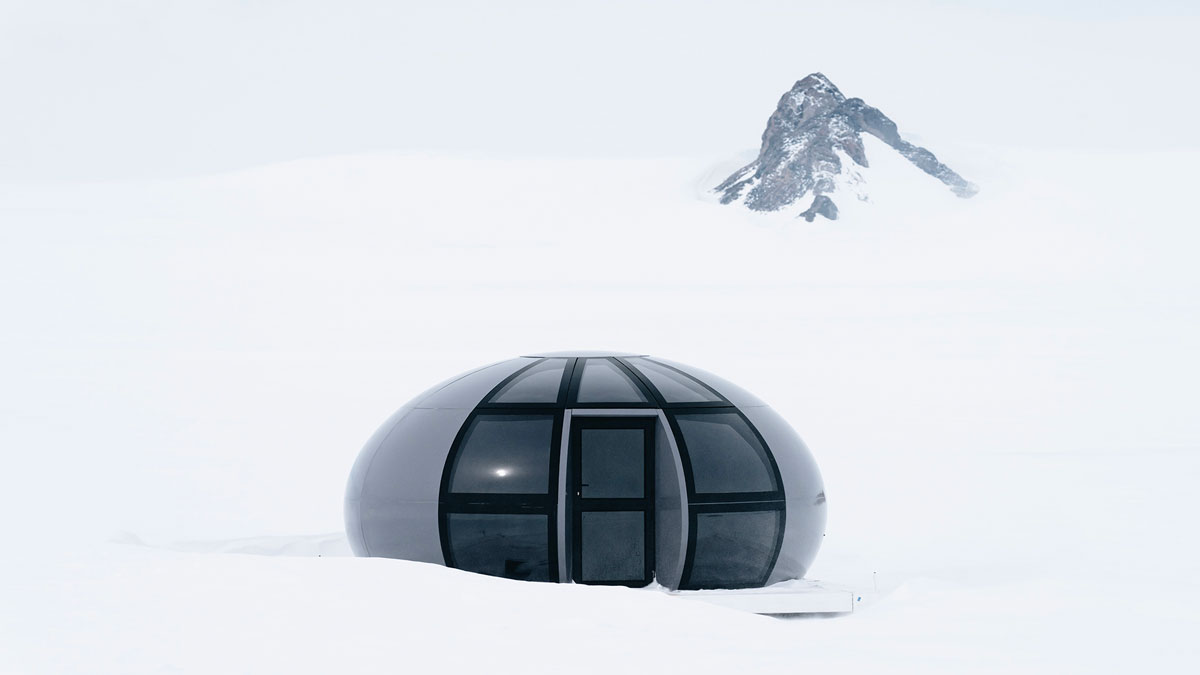 Escape to the future...I mean outer space...I mean Antarctica with the stay of a lifetime in one of these Sky Pods at White Desert's Echo Camp.

White Desert indeed modeled their futuristic sleeping pods after space station interiors. And if the domed walls and ceiling, and out-of-this-world views from the panoramic front windows don't take you far enough away, decor that includes original photos taken from the International Space Station (ISS) by former Commander Colonel Terry Virts should fill in the blanks. And, for what it's worth, Virts has said the mountains populating the Echo landscape "are the most beautiful I have seen across Earth, Venus and Mars."

In addition to the mountains, Echo Camp features include:

Staying in a Sky Pod at Echo Camp is a private luxury experience White Desert provides for up to 12 people. All components of the camp - the 6 composite fiberglass bedroom pods, plus the central propellor-shaped eating, meeting, and staff areas - are designed to be broken down and hauled away after use, "leaving no trace on the Antarctic landscape."

"Self-Generating Water Bottles" might be a better description of Fontus' incredible new designs. Presuming they work as stated (this is another crowdfunding campaign after all), Fontus Airo and Ryde bottles don't just...

The Best Gifts for Outdoor Adventures

Recipients of the Best Gifts for Outdoor Adventures are the types who'd trade 4 walls for 4,000 feet, smart home devices for the smarts to build a home when left to their own devices, and a weekend Netflix binge for a...

It's Choose Your Own Adventure IRL, and in the style of a scratch-off surprise challenge to create enriching and memorable experiences! OK, the word "adventure" notwithstanding, I guess The Adventure Challenge scratch-off...

Foodheim: A Culinary Adventure author Eric Wareheim is an actor, director, winemaker, and foodie. But you might know him best as Arnold, Dev's giant "token white friend" in Master of None, who develops a fondness for...

Weekend adventurers, consider welcoming Dave Jr. to your family. The little tyke version of Amabilis' Dave Duffel is a bag built to stay strong and dry when you want to travel hard and light...

The VERTIX GPS Adventure Watch endeavors to be a technological sherpa for your outdoor expeditions. Part navigator, part activity tracker, but stronger than both (like Michael the Lycan-vampire hybrid from Underworld!)...