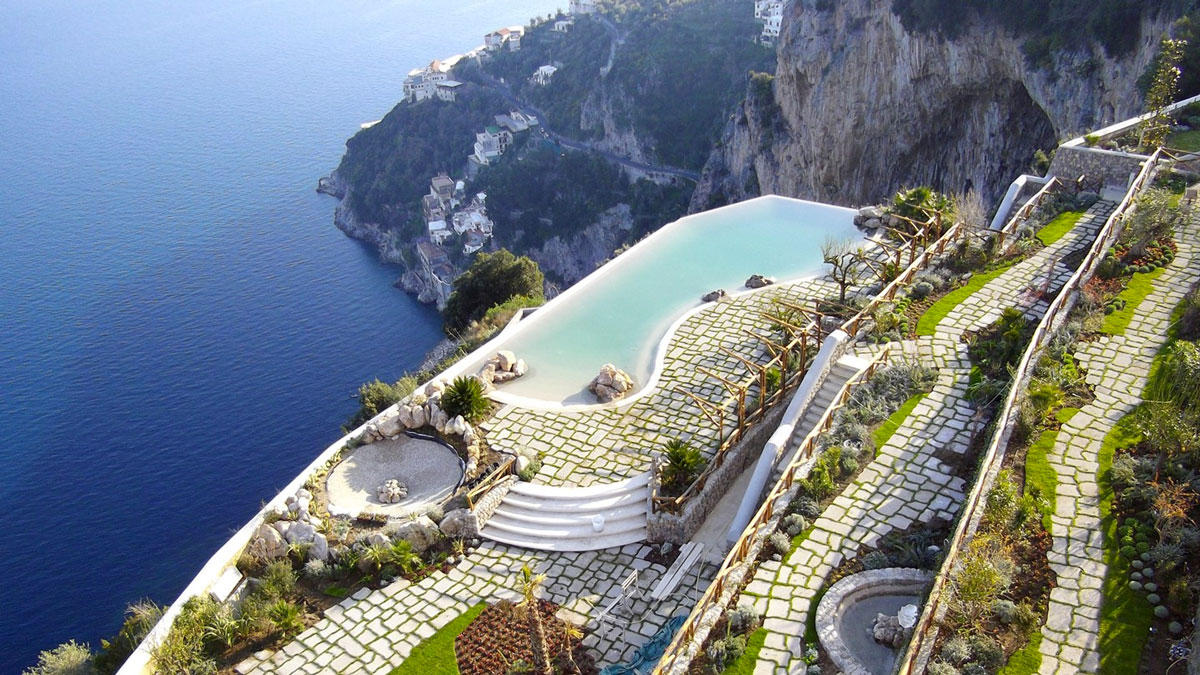 A fifteen-mile span of coastline approximately 175 miles southeast of Rome calls itself the Amalfi Coast. Within that pocket of Italian paradiso, just 10 minutes from the town of Amalfi, lies a step beyond paradiso: the Monastero Santa Rosa Hotel. Secluded but not insular, staggering but not intimidating, the Monastero Santa Rosa's four levels of gardens, expanses of lush landscaping, and full-service spa cater to only 20 rooms and suites within the walls of a transformed 17th-century monastery. The grounds are populated with a dramatic, cliffside infinity pool, bar, fine dining restaurant, library, and myriad indoor and outdoor relaxation nooks awaiting guests with lounge chairs and canopied daybeds. A pretty decent international getaway for anyone looking for decadence, relaxation, and the option of alternating between total privacy and showstopping vistas, and the open arms of a bustling fishing village. And also mass quantities of lasagna. Alfredo. Pizza. Gelato....

The Rooms & Suites. They have preserved the former monastery's vaulted ceilings and structure of the nuns' rooms and refectory, and each is named for an herb the women would have used to devise their medicines from the Monastero Santa Rosa garden. All exude Neopolitan elegance and Italian antique accents handpicked by the hotel's owner, and encompass a sea view panning from the Conca dei Marini's fishing harbor below to the town of Amalfi just beyond.

The Infinity Pool. Unmatched along the Amalfi Coast, Monastero Santa Rosa's infinity pool has been sculpted into the rock-base cliff of Monte San Pancrazio and blends nearly imperceptibly into the sea below. Some may consider it a destination unto itself.

Hiking Along the Amalfi Coast. Experience the Path of the Gods, a trail high in the Amalfi Coast cliffs that overlooks the water, providing perpetual visual rewards throughout the 3 hours it takes to complete. Begin in Bomerano and head towards Positano.

Chowing Down. The Monastero Santa Rosa's fine dining establishment serves 3 squares a day, with cuisine highlighting the best of the Mediterranean. Ingredients are harvested fresh from the surrounding Campania region. The Amalfi Coast, much like Cinque Terre, enjoys a bounty of seafood, particularly anchovies, which are often served simply baked or grilled. Other local specialties include buffalo mozzarella, eggplant, and Neapolitan pizza (reflective of the area's location just 80 miles south of Naples).

Off-season due to space constrictions...but not too off-season due to the Italians' love of taking their own vacations. Facilities operate sparingly, or completely close shop, between November and mid-March, but May and June, or September and the first half of October are swell. The former come with fresh summer blooms, and the latter prime beach weather...without the sardines.

Want 30 minutes' worth of meditation in 3 minutes? Want it n.o.w.? Solu's New Origin Waveform Tone Therapy feels you, and hopes to make you feel better, with their n.o.w. "Yoga for Your Mind" sound-based calming, centering...