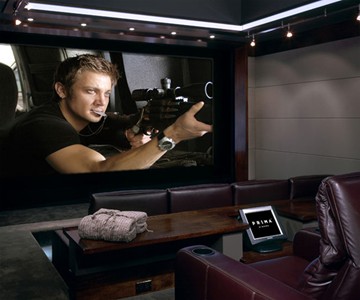 $35k
from Prima Cinema »
Check It Out

Because I can't afford to pay $15, much less $500, to see a movie on the day it comes out in theaters, I'll still get my in-home new releases from bootleggers and watch Django Unchained between the heads of people who did fork over the dead presidents to see it at the Cinerama. But for those of you who have ungodly wads of cash bursting from your bank accounts--or know someone who does and of whose generosity you could take advantage--have a look-see at Prima Cinema, a cinematically elite service that beams Hollywood's finest to your home on the day they're released.

Oh, but keep in mind that the Prima hardware--essentially a player that fits into a standard 19" rack cabinet--also costs $20,000 out of the gates.

Prima Cinema essentially means no more rolling out the sleeping bag for an overnighter and guaranteed spot at the midnight release of whatever comic book or teen fantasy novel is hitting the big screen next. With Prima, you have a ticket, and an annual income, that will ensure you're always first in line and seated prime in your own private theater. The Prima Player functions with existing A/V equipment, outputting both audio and video over HDMI. It connects to control systems via RJ-45, the Internet with standard ethernet cables, and is designed to work with existing video displays (projectors, flat screens), audio systems (receivers, processors, speakers) and control systems (touch panels, remotes).

The Prima Player itself, slick little gray plastic composite fox that it is, was fashioned by BMW DesignWorksUSA, and juiced up by Prima engineers to project digital video quality with greater picture clarity and deeper colors supposedly even than highest end Blu-ray players. The visual experience is complemented by lossless Audio to ensure the surround sound retains the same fidelity as the digital studio master. I don't really know what that last sentence means. I pretty much copied it verbatim from the Prima Website. Sounds like a good selling point though, huh?

Lucky SOBs who acquire the Prima system will have access to all opening weekend box office releases, whose availability will continue for as long as they remain on major theaters' docket. That is, a constant stream of films will flow through the player, with accessibility ceasing once the movie is no longer a shiny new release. This is so that video stores such as Blockbuster and Hollywood Video won't go out of business. Oh wait....

Yippee Ki Yay, motherfu- uh...dudes, it's a Die Hard Advent Calendar! Leatherhead Laser Work even laser-cut his clever, original countdown design to depict one of the best scenes in the movie: Hans Gruber plummeting to...

A few hours from now, when you're knocking back beers and sausage rolls during Super Bowl 50 at your friend Cornelius' house, and wondering why you keep feeling random shooting pains down the left side of your neck, circle...