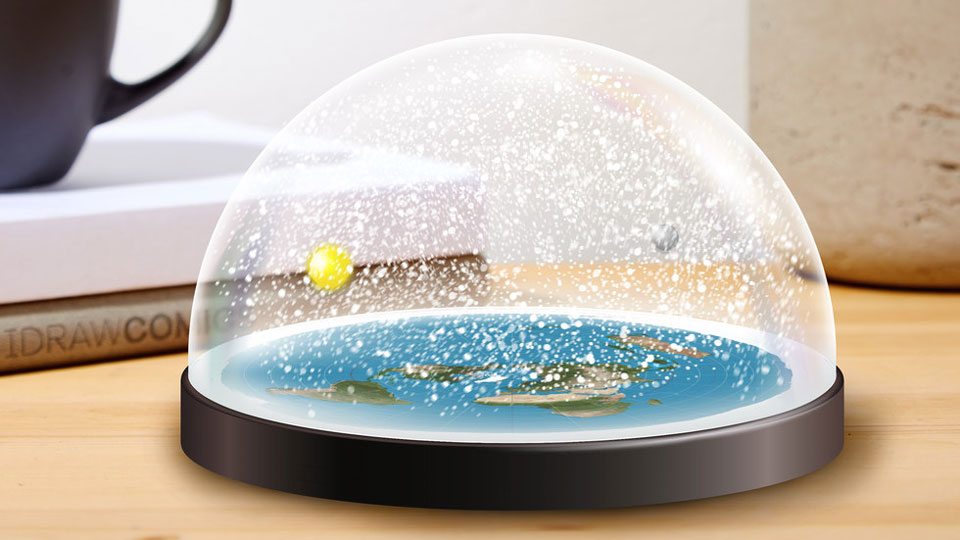 A giant blizzard snows down on this 100% accurate replica of how Earth looks from space, depicting both the rightness of flat earthers, and proving there's no such thing as global warming! So suck it, sheeple!

Just as there is a dearth of people out there who understand that the world is flat, there also seems to be a dearth of gifts for the woke folks who get it. Here's hoping the Flat Earth Snow "Globe" is just the first in a line of desktop pieces and household decor here to challenge the persistent and erroneous presence of spherical Earth items such as globe bar carts and fire pits.

The Flat Earth Snow "Globe" features a Modern Flat Earth Society-approved map on its flat bottom, and an atmospheric dome over the top to contain the snowflakes proud owners can shake up whenever they hear a news report about record cold temperatures and accumulation.

Those of you seeking gifts for people who don't think we landed on the moon are also in luck - head over here.

Here's a blast from Halloween past. And not just OG, circa 1978 Michael Meyers, OG 2.0, circa 1998 Michael Meyers too. Remember when they released the Halloween H20 remake to celebrate the series' 20th anniversary? And...

Well. F*ck. My flight got cancelled, so instead of bringing back coconut bras and pineapples as souvenirs from Hawaii, I guess I'll just shake up this Fuck Snow Globe. My souvenir from life...

At first I saw this box of Chocolate Planets and was like, "1-2-3-4...9! Martin's Chocolatier didn't diss Pluto in their presentation of our solar system in luxury confection form!" But then I read the Chocolate Planet...

Not everyone can be like former 'N Sync definition of awesome, Lance Bass, and make a very public, failed attempt to ride in the space shuttle, but everyone (well, everyone with $500 to $1,600) can gaze at the stars from...

Made based on the icosahedral projection method, this Earth Puzzle is going to be a doozie for even the most adept puzzle masters and possessors of spatial intelligence. Another name for its type of loosey-goosey configuration...

The Geochron is one of the coolest maps I ever saw. Not only is it all big and backlit, but the map itself is a conveyor belt driven left to right in sync with the earth's rotation. So at any given time the Geochron and...