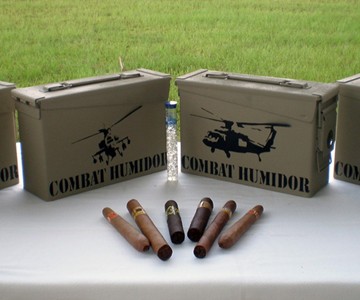 Combat Cigar Humidors take Made in America to the next level. The waterproof stogie canisters are also custom crafted to order by disabled Marine Corps veterans out of Spanish cedar encased in an M13 7.62 x 51 linked ammo can. Spanish cedar serves as a traditional humidor material due to its neutral aroma that doesn't permeate cigars with fragrance, and its natural resistance to wood-boring insects and rot-friendly outdoor conditions. Ammo cans serve as this humidor's casing because they are airtight on the outside, maintain prime humidity levels on the inside, and make anyone toting them around look like the dopest mack on G Street.

Say their fabricators, "The Combat Humidor was created to survive the rigors and abuse of war." We presume that means ZDay. And what better way to celebrate your survival of a zombie attack or raining of meteoric fireballs from the sky than a smooth, fat Cuban whose quality and integrity has been perfectly preserved throughout the gunshots, explosions, and exposure to infected brain matter? Ammo cans chosen to serve and protect tobacco products are first hand-stripped of surface rust, and then sprayed with Rustoleum primer. Paint choice is Coyote Desert Tan with a slightly rough texture reminiscent of US military vehicles in Iraq and Afghanistan. The finished Combat Humidor will float, resist small shrapnel, and stand up to general mistreatment, such as one's wife or girlfriend tossing it out a second-floor window when she finds a wrong colored hair in the bathroom sink.

Available in a Base Model ($70) with just the words "Combat Humidor" across the bottom of the can, as well as Stenciled Art models ($100) featuring various icons of the military (tanks, choppers, Megan Fox) the cigar preservers are ideally suited for military personnel deploying overseas or going into the field, as well as puff enthusiasts who also spend a lot of time outdoors--campers, hunters, boaters, golfers, stoners in the park. Oh yeah, you know the Combat Humidor will keep your weed cozy and fresh in the face of the elements.

If you're planning to order for Christmas, better shake a leg. Combat Humidors take 2 to 3 weeks to make and ship.

Pocket knives, multi-tools, pens, pry bars, titanium toothpicks, the VAULT modular EDC organizer has a place for them all. A tidy place. One that doesn't see the hundreds (thousands?) of dollars you've spent on your everyday...

Mystery Boxes are the win-win gift. They make the tedious purchasing and giving process only a molecule more strenuous and demanding of thought than buying a gift certificate to Best Buy or Chick-fil-A, yet their effect...

One time for Christmas I got my grandma a nylon reusable garbage bag to hang off one of her front car seats and my brother laughed at me like it was the worst gift a grandmother could ever receive. But I only got it because...

A Magic Billet represents the assembly of solid, aircraft-grade aluminum and a magnetic locking system. Together, these outstanding components surreptitiously store my stash. Of gum. I have to hide it, you know. Ever...