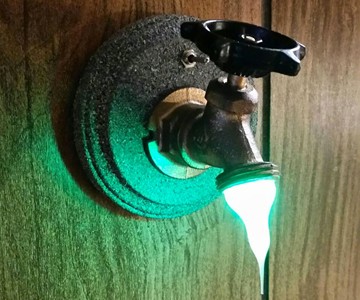 Looks like Doktor Alcock has perfected the PSI* of his faucet with a warm green LED. The running faucet night light from Resin Store is a nifty little stick-on for bedrooms, bathrooms, hallways, or anywhere you need to navigate after dark without tripping or stubbing a toe on some piece of Victorian clockwork.

Obviously the wood-backed resin spigot and its flow of glow make a nice steampunk gift for fans of the genre too.

Despite its look, the night light: 1) is powered by 3 x 1.5v button cell batteries rather than steam; and 2) is a replica of your standard metal faucet cast in hi-impact resin, so it weighs just 4.5 ounces. Given the light's adhesive backing, that comes in handy when you expect it to stay on the wall you stick it on.

These mylight.me under-bed LED strips have motion sensors so that when I have to take my clockwork whizz at 3:00 a.m., I can be considerate of my snoozing imaginary girlfriend without fear of rib fracture from the corner...

If they'd given Joseph an Amazing Technicolor Dream Shark instead of a Dream Coat, this holographic LED lamp is probably what it would have looked like. It would've been a way better gift too--I bet Joseph's brothers...

Did you know if mushrooms are exposed to UV light while they're growing it activates the production of Vitamin D in their tissues? Vitamin D that you can then ingest and absorb in your own tissues? In fact, mushrooms...

Although the shortest day of the year is behind us, we still have two solid months of darkness by 5:30 p.m. ahead, which is really depressing unless you consider what it must be like to walk around with Oprah Winfrey's...