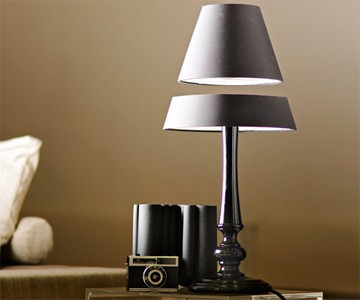 Crealev designer Angela Jansen has taken a machete to boring old lamp shades, and thrown in some magnet magic to keep their hacked off top half afloat after the attack. The Silhouette, a conical shade, and the Eclipse, a more modern geometric incarnation, mark the first levitating lamps to hit the world of home decor.

The lamps' integrated levitation technology consists of electromagnetic components and a perpetually communicative control system encouraging the top chunk to suck it up and maintain its position hovering above the bottom. Lighting is LED, which makes the Silhouette and Eclipse low in power consumption in addition to being rad to the max. Touch sensors allow for fingertip adjustment of wattage output intensity.

The Silhouette rises from a handcrafted wooden base with a high-gloss black finish. Its shade comes in matte black fabric with pearl white inner sid furnishing, and light flows the split's "horizon" with the help of a mirror covering the lower piece. The Eclipse has a glass footing, with shades available in either matte black or silver gloss finishes.

Other specs are as follows:

A little floating fire with a bioethanol flame blazing from a stone center. That sounds...well, it actually sounds about as safe as candles, incense, and tabletop fireplaces. And since the Myconos Levitating Firestone...

Now here's a lamp that really bridges the gap between art and functional lighting. Mark Mitchell's Bridge Lamp will obviously look outstanding running across your desktop or work table. But the designer says it will also...