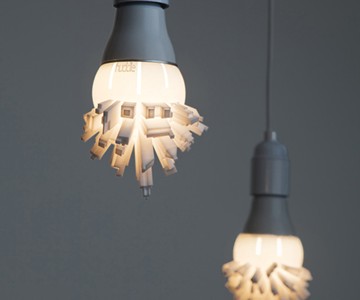 An upside-down, convex city. Well, Spider-Man would fare well here anyway. Dutch designer David Graas has breathed new life into boring frosted light fixtures with his urban cityscape lampshade, which he calls the Huddle. Named for his interpretation of contemporary human survival strategies--huddling together in mega-cities to battle the plights of life, just as penguins huddle in the Antarctic to survive extreme temperatures--the light bulb cover is yet another fascinating product of 3D printing. It arrives directly mounted on a 5W LED bulb, projected to last for 20 years. Or about 5 times as long as cynics predict our major cities will in these times of economic crisis and China joining the ranks of Jennifer Lawrence and Amber Heard as the new It Girls.

Graas, though, isn't so downtrodden on his predictions. He intends his Huddle lampshade to depict the urban macrocosm as the key to a sustainable future, due to big cities' dense concentration of information, technology, and talent. He also believes 3D printing will soon be a staple of our infrastructure, with a shop on every corner peddling on-demand wares that defy the typical material and product transport requirements.

Graas' cityscape lighting design is also available in a floor lamp model for $360.

The Vast Land Incense Burner Lamp is supposed to be a great companion for yoga or meditation, but looking at it kinda brings me the opposite of relaxation and peace. That lone figure walking along a barren terrain of...

This is a Spine Lamp. A spine lamp that doesn't forget the pelvis! And you shouldn't either, all ye back archers, tail tuckers, and hip droppers out there. See, you have to think of your pelvis as holding a bucket of...

This retrofit wand will automate and motorize your existing blinds, so you can keep the blinds you love...or hate, but still already have installed. Makes a lot of Sunsa, 'eh?...

Now here's a lamp that really bridges the gap between art and functional lighting. Mark Mitchell's Bridge Lamp will obviously look outstanding running across your desktop or work table. But the designer says it will also...

Natural sunlight is overrated, but slatted blinds and electroluminescent lighting are even more badass than their hype. Cash in on coolness, and brighten up your basement apartment or 10 x 15 cubicle with this simulated...