When to Bolt & Pee App 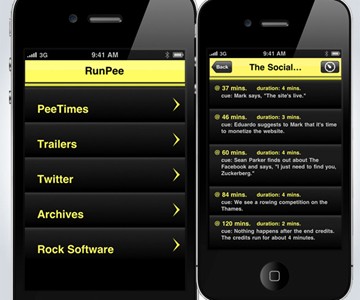 Since I have the bladder of a camel (and the strength of an ox and the valor of a lion and the manly aggression of a rhino and the heart-melting adorability of a baby polar bear) I don't really need an app to tell me when the best moments to leave a movie and use the john are, but those with pea-sized pee reservoirs, buns in the oven, or some bad oysters dancing in their digestive systems could benefit greatly from RunPee.

An app for Android, Apple, and Windows smartphones, RunPee's primary duty is to pinpoint 3- to 5-minutes spans during a feature film when nothing exciting, funny, or important happens, and communicate that via a feed to the phone. Each cue indicates how long into the movie the recommended toilet run occurs, what is happening on screen or what the actors are saying at the time, and how long the user has to answer the call of nature before things start getting interesting again.

Initially, I was considerably impressed that some egghead out there was able to generate the algorithms and coding necessary to extract and report the parts of movies during which communing with one's excretory system would provide more pleasure than continuing to watch where one's $15 just went, but when I did something unusual and actually read about the product before completing its writeup, I discovered this isn't at all how RunPee works. It's even better, and more old-school-hardworking-American than that.

The so-called "RunPee family", which appears to consist of a mere three people, physically attends every single widely released US movie on its opening day, and just...watches it...for breaks in the action that they perceive as ideal times to do a #1 (or #2 if you can pinch one off in less than 5 minutes). They start evaluating pee times about 30 minutes into the film, and cease at 20 to 30 minutes left. Shorter movies of around 90 minutes may have only one noted bathroom break, while those over 2 hours usually accrue 2 to 3. Each designated RunPee time also includes a synopsis of what happened during the break.

The RunPee family has also loaded its app with additional movie-centric features, such as:

The RunPee app can be downloaded to Android and Windows phones for free. iTunes charges $0.99 for an iPhone or iPad download.

Muchas danke to Mitch T. for the product suggestion.

Got peeing at the movies down? Then you're ready to learn How to Poo at Work.

Dude Wipes: A Brief Overview of Audience and Application. Dude Wipes are for dudes. And every once in while--say, every 18 to 24 hours--dudes tend to have an especially...explosive...encounter with the bathroom. The kind...