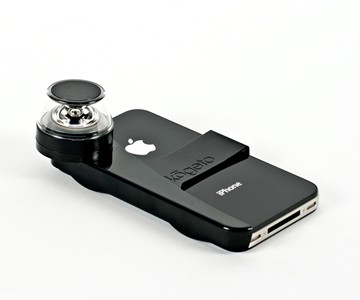 March Madness looms. Imagine sitting amidst a heated, neck-and-neck Final 4 battle during which you could simultaneously film: the epic panorama of on-court action to the right; a head coach about to soil himself screaming at the refs to the left; cheerleaders...bouncy, bouncy...straight ahead; and two opposing fans, shirtless, pot-bellied, wasted, and throwing right hooks behind you. Simultaneously. In sensory-overloading unison. Without missing a second of one to pan over to the other. The Dot panoramic lens for iPhone versions 4/4S miraculously melds the omnipresence of Big Brother, with the sophistication and mobility of octopus optics, to shoot mind-blowing, 360-degree, interactive videos from the palm of your hand.

OK, fine. It really just busts out a few trickety-tricks with mirrors to produce the panoramic effects. But the results are just as sweet. The Dot snaps to the back of your iPhone like a case would and, in video mode, captures the complete sphere of action surrounding you. At concerts, on the dance floor, in the courtroom--never again miss a note, step, or jury member's reaction to your baby mama's testimony. And after the video is shot, a free Looker app will stitch the footage together into an interactive video you can scan through with your finger--similar to navigating Google's Street View. From Looker, you can also post videos online, where they'll play in Flash.

If you prefer to see your world flat, The Dot can do that too. Just record and save the footage as an HD widescreen video on Looker.

Other Dot specs include: