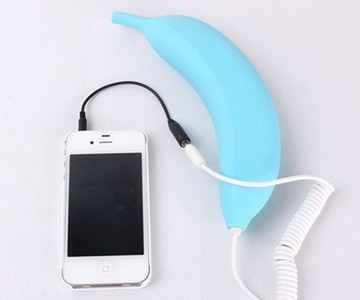 You've always known bananas are healthy, but did you know holding one against your face can prevent brain tumors? Apparently, you can also use them to communicate with your mother. The Radiation-Proof Banana Handset for mobiles connects via a 3.5 mm audio jack to all smart phones with, uh, a 3.5 mm audio jack. Some examples of these types of phones include the iPhone (obviously the banana is compatible with the Apple), Motorola, and Blackberry models. The Banana Handset has received endorsements from the following important people: Inspector Gadget; monkeys; and Gwen Stefani, the latter of whom taught us all not only how to spell the word "banana", but also how to cheer it in a sarcastic voice of retaliation against Courtney Love. Speaking of pop stars, I bet Mariah Carey likes the Banana Handset too. Because that chick is most definitely F'ing bananas.

While the Nokia 6310 has always been a brick phone rather than a flip phone - and you know how I love me some flip phones - Nokia's 2021 upgraded rerelease of this mobile classic still sends my heart aflutter. Dudes...

Are you kidding me? An Argentine made the DestapaBanana flavor injector? Not Ron Popeil or some borderline obese overenthusiastic dude with a pet monkey on Shark Tank?...

Everyone knows that Japanese people are out of their fucking minds a little bit eccentric when it comes to... everything, but that's why we love them. This streaking flashing banana, I think, captures that eccentricity...

The Shadey universal smartphone shade: because I get enough glares from my wife for having my head buried in my phone in public; I don't need the sun's glare piled on top...