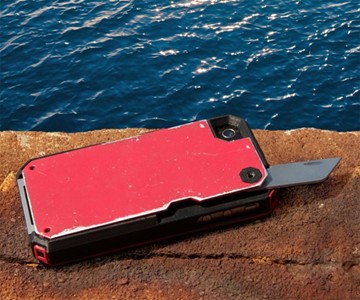 Who goes anywhere without their phone? My guess is zero people. Who goes anywhere without a pocket knife, screwdriver, wrench, ruler, and bottle opener? My guess is a few more than zero people. Maybe even enough people to make these sorts of implements condensed into an iPhone 4/4S/5 case a successful project for Indiegogo and Jack Bat Designs' ADAPPT XT. Since it's unlikely that we'll leave our phones behind during the precarious navigation of life outside the home, the ADAPPT XT proposes to ensure our most-needed tool won't be left behind either.

Fundraising on Indiegogo runs through September 26, 2012, with a goal of $17,000. A $45 pledge returns one ADAPPT XT iPhone case in Belmont Red, Coyote, or Ninja Black. Retail price of the cases will be around $60. For $100, backers will receive both an iPhone 4/4S ADAPPT XT, plus a second case for the iPhone 5 when it debuts this fall.

Big spenders with the travel bug and survival instincts may pledge $3,000 for a trip for two to Charleston, SC. There, you'll hang with tour guides the Jack Bat team for 4 days and 3 nights doing some Historic Charleston touring, offshore fishing, and hotel chilling. You'll also get 4 ADAPPT XTs.

Funny how even though Bear Grylls was alleged to be kind of a fraud several years ago--the guy who roughs it to the bare bones, in the jungle with nothing but a pocket knife, some fishing line, and his wits by day, but...