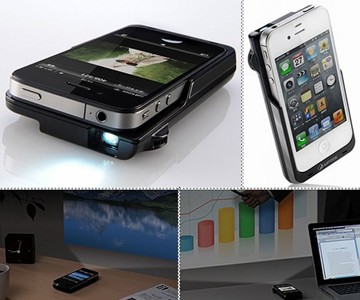 The PRJ016 iPhone 4 Micro Projector is a revamped version of Sanwa's original smartphone sleeve, which magnifies handheld microcosmic visuals, and then blares them into macrocosm across walls or white screens for large format viewing. In addition to starring in makeshift home theater nights--allowing us to rewatch The Neverending Story as it was meant to be seen, even in efficiency apartments or hotel rooms--the micro projector also plays a supporting role in work and school presentations, and public speaking engagements that include maps, charts, or JPEGs of a baby gorilla's startled response to its first checkup.

Sanwa's DLP projector is 1,850mAh battery-operated, and along with transmitting videos and images, it will also recharge its nestled iPhone to 80% power. Usage is allegedly simple, following the slide-and-view model of inserting a phone into the sleeve, adjusting focus and brightness with a dial on the side, and hunkering down for a thrilling evening of adventures with Atreyu and Falkor. The Micro Projector also comes with ShowU, a free app that allows for linkage with SNS and, in turn, increased functionality. Run time is approximately 2 hours before charging via USB is necessary (charging does not require removing the phone from the projector sleeve.)

Since the last generation of Sanwa projector, improvements have been made to lumen output, so the current version has the capacity for around triple the brightness. Resolution is 640 x 480, with a projection area of 6" to 60". Case size is relatively low-profile at 2.7" x 5" x 0.8". Micro Projectors ship directly from Japan, so they're (somewhat prohibitively) pricey at around $450. The original recipe Sanwa projector is also available from Japan Trend Shop, for an only marginally less pocket-draining $366.

Normally when you tell me something has 5 heads, I assume it's something I wouldn't be interested in. Like a hydra or a person with a huge forehead. But this 5-head projector floor lamp is awesome! You can use attached...

The Lamp+ from Swiss tech firm is an office gadget that projects content from its overhead pendant light onto the desk, conference table, or other work surface below. Projected content is controlled by ABUSIZZ Haptic...