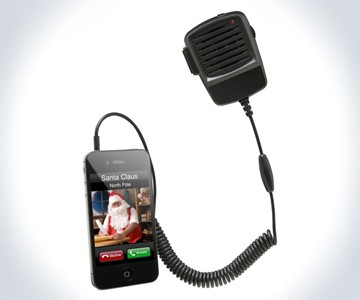 One thing I like when I am talking on the phone is complete silence with no interruptions from the other end. Some of the best conversations I've had have occurred when the cell phone signal was actually lost, but I didn't realize it for 4 to 6 minutes. What? I should just pick up the old iPhone and carry on a fake conversation with myself? No, I can't do that. That would make it seem like I'm some controlling, self-important SOB. I think I'll just get a CB Radio Handset for my phone instead.

CB Radio iPhone Handsets also come with a belt clip, but not the 2 AA batteries required for use. Life is a highway, dudes. Or a least a half-block stroll between the 8 x 12 cubicles at Facebook app startups and the nearest Starbucks. So if you're gonna ride it, leave those girly man Bluetooths at home, and CB-Radio-ride-it right. Over and out.

I'll take a shot of Beauer truck camper, please. And make it a double. No wait, on second thought, make it a triple. The Beauer 3XC is an electro-telescopic camper that attaches to a truck bed as a cylindrical cell no...

Sometimes I like vintage. Well, vintage aesthetics. Not really vintage functionality. Or the thought of being in my strapping manly prime when now-vintage things were in theirs. Typewriters. Cool to look at. Not cool...

The Legacy Power Wagon. As the name suggests, it isn't new, but with only a handful crafted per year--by artisan auto mechanics at Legacy Classic Trucks in Jackson Hole, Wyoming--it remains one of the truck world's most...