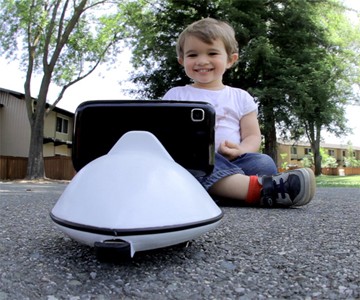 If you woke up to a big plate of chicken fried brains sloshing around in your head this morning, just watch the Botiful robot video. We even put it at the beginning of the writeup this time for those who, like us, are having the kind of day during which they find themselves just staring at fields full of words, hoping meaningful sentences will somehow corral and herd their own asses into the correct cranial hemisphere.

But for those of you undisposed to video viewing, here goes: Botiful is a tele-presence robot for Androids--the first of its kind available to consumers--that allows the video chatter not in the room to tool around it and interact with those who are. For example, parents away from their children can make a video call through Skype and then, using the Botiful interface, manipulate the 4-wheeled robot across tables and floors, as well as adjust the angle of the phone in Botiful's cradle, for a fully interactive experience with the tots on the other end. Callers, no longer restricted to the static placement of the camera, can self-adjust their positions, and see exactly what they want to see.

In addition to playing with the kiddies--or using as a highly versatile baby monitor--Botiful also comes in handy during: remote business meetings, job interviews, and conference call; reunions and get-togethers the college buddy who moved to Lichtenstein can't make it to; and efforts to examine or evaluate details you're either away from or cannot easily access. Think house hunting and checking out the underside of a car.

Currently, Botiful is compatible with most Androids on the market (list of tested models here). Those interested in using it for simple interactive communication will probably find Skype to be its easiest application, as the two have been fully integrated. However, anyone with technical know-how who wants to develop his or her own apps, sensors and actuators, and data formats has the option of purchasing a Botiful with a complete SDK--mutually exclusive from Skype--that allows for creating any extension the imagination can conjure.

Obviously if you want to control a Botiful, you have to be video chatting with a person who has one. So in a way, it's a gift you give to yourself by giving to someone else. Huh. That's kind of a nice and borderline profound paradigm. Anyway, to use the system with Skype, robot owners need only insert their phone into the Botiful cradle. This alerts Skype contacts the robot is online with a funky antennaed icon that reads, "I am a robot." Once video chats are connected, the robot controller uses a Botiful interface of arrow buttons or an advanced remote control panel to navigate the interaction. If Botiful apps are installed, these will appear on the user's interface as well. Man, if my grandma knew how to turn on a computer without electrocuting herself, she would flippin' love this shit.

Roboticist engineer and Botiful mastermind, Claire, has spent years developing her tele-presence robot, and is now exploring its appeal and possibilities through Kickstarter. The project runs until August 22, 2012, with a $90,000 funding goal. The $199 pledge is for early birds who want their very own Botiful robot in white; at printing, 120 of these were still available. Once they're gone, pledge price for a unit is $245. At $250, backers also receive SDK access, and at $290, all of the above, plus the opportunity to customize Botiful color combinations (red, white, and blue parts available).

November 2013 Update: Following a successful Kickstarter campaign and initial production run, Botiful is in the process of replenishing its stock. Interested parties can join the wait list by following the link below.

"Amagami" is a Japanese term for the inclination and act of babies and pets nibbling on your finger. And apparently this finger-nibbling - presumably without drawing blood or causing a nasty foreign saliva infection -...