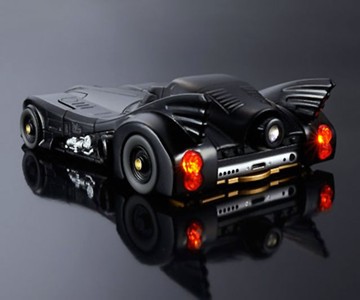 A few bucks shy of being able to afford the jet turbine powered Batmobile? How about buckling your phone up in one instead? Specifically, this most excellent and radical and schwing!-worthy replica Batmobile case for the iPhone 6. Note: Late 80s/early 90s jargon is appropriate because Bandai Toy Company's "Crazy Case Batmobile" design is based on Tim Burton's stylization of the Dark Knight's car during his 1989-1992 stint spearheading the franchise.

The Batmobile case for iPhone 6 has not yet been released, and once it hits the virtual shelves, it appears purchasing will initially be limited to Asian markets. Oh, chin up, Robin, it'll get here eventually. You finally made it into the movies, didn't you?

Crazy Case Batmobile includes an LED lighting system and--booyah!--a projector that casts the Bat-Signal. On the case's touchscreen side are Batman's utility belt to hold it in place, and a camera lens access via pop-out front wheels.

Want a Crazy Case for your iPhone 5/5S? Get the Batmobile Tumbler version here.

This Batpod is real--one of six special effects dude Chris Corbould made for The Dark Knight and The Dark Knight Rises movies--and it's up for auction beginning September 27, 2016. You might want to think twice about...

What stands between you and the driver's seat of a precise, officially-licensed roadworthy replica of the 1966 Batmobile? One year and a few zeros, my friend. The most iconic of all the Dark Knight's transportation iterations...

Fine, HUSQVARNA didn't design their Automower to look vaguely like the Batmobile. That's just a happy coincidence. And further reason to shell out a couple grand to purchase a robotic lawn mower to tend unattended to...

An exact 1:6 replica of the Batmobile featured in The Dark Knight, created by Hong Kong's Hot Toys. The 29" long x 18 1/2" wide x 11" tall plastic model has functional headlights, a rooftop panel that opens and closes...