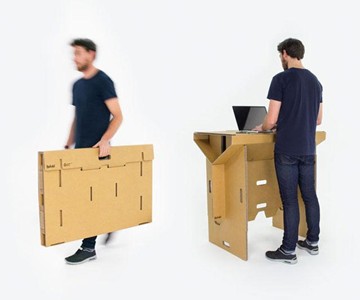 Made in New Zealand from 100% recyclable cardboard, Refold's Red Dot Award-winning portable desk unfolds from a lightweight portfolio case into either a sitting or standing work station. Is it strong enough to hold your laptop, water bottle, and lucky 20-pound boulder? Well, it's strong enough to hold 3 different Kiwi men who appear to weigh at least a buck fifty, so I'd say probably so.

Refold is intended for offices, schools, dorm rooms, creative studios, events, and mobile offices as may be needed on construction sites and during disaster relief efforts. Its entire composition consists of around 14 pounds of 7mm thick, twin cushion kraft cardboard. To assemble the desk from its flat pack requires folding and slotting 4 main pieces, but no additional tools or hardware. It should take around 2 minutes.

Refold's desks, in versions Standing, Sitting, and a combo of both, run as a Kickstarter crowdfunding campaign through November 10, 2014.

If you want a smart workstation with a futuristic look, in-desk display, a full top surface of wireless charging, power outlets galore, and nary a cable in sight, I think you're beginning to see the Lumina. The Lumina...

I don't know when Cooler Master is going to release their Orb X, a motorized, multi-purpose, immersive gaming and work, but probably mostly gaming, station. Maybe when the spaceships arrive from the future, or Han Solo...