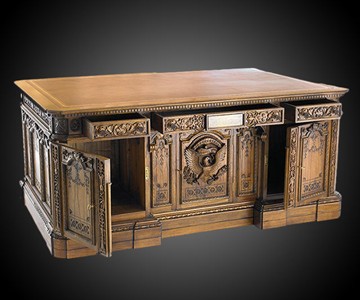 Executives as distinguished and dominating in the business world as I am require a desk that mimics their persona. Grand and imposing, intricate and enamoring, a desk of presidential proportions. As in, one actually used by American Presidents. The Resolute is a museum-quality replica of a desk used faithfully by American Presidents from Kennedy to Clinton to Obama since 1879.

Its story begins on a British ship, the HMS Resolute, commanded by Admiral Sir Edward Belcher during his search for the Northwest Passage. After it was abandoned in 1852 American whalers discovered its remains, and the American government purchased and restored the ship as a gift to Queen Victoria. Unfortunately, she had been hoping for Ranch dressing and cream cheese (which, for reasons inexplicable, are not available in England) and also a big fat diamond, so instead of using the Resolute she chopped it up and made it into a desk, which she then re-gifted to President Rutherford Hayes in 1879. Or something like that.

And according to the History Company, "American Presidents have conducted the country's business across the glorious Resolute Desk ever since." One of its most notable roles: a 1960s-era photo of John Kennedy Jr. peeking out from its kneehole panel as his father worked above.

This precise replica of the Resolute is hand-crafted in the buyer's choice of solid oak or mahogany by credentialed artisans, carpenters, and wood-carvers who have studied the drawings of William Evenden, designer and builder of the original Resolute desk. The desk top is hand-dyed and gold-gilded in "walnut" leather. It measures 72" long x 48" wide x 31" tall. Features include functional drawers and cupboard doors that open from both sides. Like the White House version it also has an attached brass plate inscribed with a message from Queen Victoria.

I don't know when Cooler Master is going to release their Orb X, a motorized, multi-purpose, immersive gaming and work, but probably mostly gaming, station. Maybe when the spaceships arrive from the future, or Han Solo...

Walk. Work. Walk while working. Work while walking. Ugh. It's like a bunch of F-words in a row, but with Ws. And speaking of F-words, F Walkolution manual treadmill desks. It's bad enough I have to perform mental gymnastics...

Worky Home Office in a Briefcase

Worky won't make the chaos of work itself any better, but the home office in a briefcase will contain the chaos of the tools you use to slog through another day of emails, presentations, and video meetings. A latching...