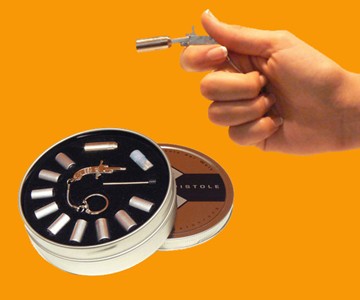 Austrian company Gerhard Göbharter GmbH has been manufacturing the Berloque, World's (Probably) Smallest Pistol, in its infinite practicality and cuteness since 1905. Approximately 124 steps and 15 individual parts come together in a 4cm x 2cm "fingerheld" to form the literal pistol of a pistol, and firecracker of a gun. A combination flare gun and blank shooter, the Berloque arrives primed for use during joyous activities, including holidays and birthday parties, as well as more serious endeavors, such as firing off an alert signal when lost or stranded, or scaring the living bejeezus out of an animal or human pursuer.

Check out the photos of the Berloque's fireworks show above for proof of its efficacy as a flare gun. As for its trustiness as a weapon of self defense, that form of assurance comes directly from the pistol's manufacturer, whose English translation of its assertions make them as worthy of quoting here as the meaning itself:

A dark lane, a dark backyard, bad lit up parking lots or endless underground parkings - there, over there an uncanny noise, a shadow, that is shooing over the wall. Well, now the berloque pistol at hand to credit. It astonishes each rogue with security. Because the cartridges of the berloque pistol producing reading, widely audible bang, the ideal suitably is, attention to exciting and puts dark shapes to the flight immediately.

Berloque pistols are packaged either in a silver tin or wooden box, along with several starter rounds of ammo. Ammunition refills are also available from vendor Singulier for around $33.