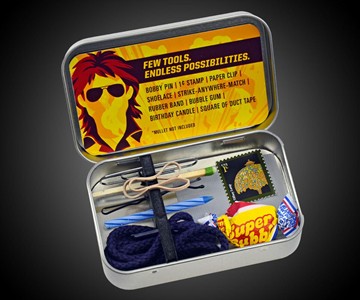 What's not included in the MacGyver Toolkit? According to iFixit, nothing but the mullet. For those of you too young to remember Angus MacGyver, here is what this pocket-sized secret agent's Altoids tin will get you one step closer to becoming. Yes, that's right. Highly intelligent, mind-blowingly resourceful, and a total dreamboat. With or without a wind machine.

Now I'll grant that all it really takes to emulate MacGyver is a Swiss Army knife, a roll of duct tape, and a brilliant solution for using them to fix a piston con-rod for a water pump. But wouldn't you also kind of like to have a paperclip and a piece of bubblegum? You know, as backup? With the iFixit MacGyver Kit you'll not only have the twist of metal and hunk of Super Bubble (<--- does anyone else salivate, yet also get an achy jaw at the mere mention of this?) but also:

Rift Recon terms themselves Physical Security Specialists. They explain what that is in about 500 words of fancy and circumlocutory jargon, the essence of which I'm pretty sure means they cater to high-class Shady McShadersons...