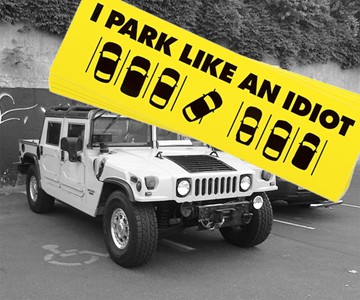 Sold Out from threadless »
Check It Out

I Park Like an Idiot stickers have two outstanding selling points. 1) Applying one to the bumper or window of a deserving vehicle will give its user an instant boost, likely eliminating the crankiness and ill-will evoked by the idiot's double-space-consuming or driver's-side-door-hugging parking job in the first place. Is that childish? Vindictive? Probably. But exacting--and taking pleasure in--revenge are qualities inherent to human nature, and at least with this tactic no one gets hurt. Including, apparently, the offending motorized quadruped. Which brings us to 2) I Park Like an Idiot stickers aren't that sticky. At least that's what seller threadless says: "They're not super sticky, so stick away." In other words, the friendly reminders remove easily and won't leave behind gummy white remnants and an hour's worth of QT with a razor blade. This ensures they will not exacerbate something else inherent to human nature: the tendency to exact and take pleasure in revenge...and then feel guilty about it later. It also reduces the likelihood of bodily injury to the person who gets caught smacking one on the back windshield of a Hummer.

Not ready to commit to adhesive retribution? Try sliding a You Suck at Parking business card under the front wiper instead.

Dressing up kids and pets is so passe. The new canvases of self-expression are appliances. And the most decadent of appliance haute couture is Kudu's magnetic fridge skins--panels that adhere to refrigerators' full facades...

Boy do I hate having to park both the Porsche and the Lambo on the front circle drive. It really detracts from the visual splendor of my gilded front door and Batman topiary. What, a retractable underground parking space...

These funny warning stickers from Bumblefack of Etsy shop AvEwerkz are like my favorite bumper sticker, "WARNING: This Vehicle Makes Frequent Stops at Your Mom's House," but for an industrial workplace setting, or your...

One guess as to which country the GazeBox hails from. A glorious transparent arc that accordions around your 6-figure sports car? Protects it in style, with pomp, and without hiding it from jealous eyes? Gotta be Italian...

Some cars pretty much park themselves these days. Some cars have so many cameras and beeping alerts when you get too close to the sides or back of your garage that they pretty much have the equivalent of a Maxsa Park...