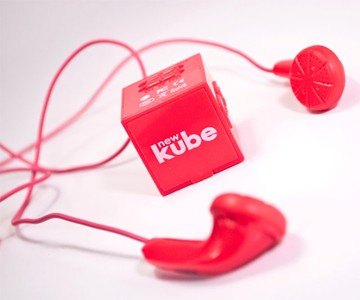 An update of theKube, nano MP3 player newKube debuted a few days ago at the 2013 Consumer Electronics Show in Vegas. Improvements to the previous model are based on user feedback, and include an inbuilt equalizer with up to 7 settings to complement the 22mm, 18-gram soundhouse's already laudable output. The newKube also incorporates organizational folders for delineating song collections and playlists, as well as a folder jump feature to accommodate impatient people who want to hear the song they want to hear when they want to hear it.

Bluetree Electronics' newKube reads microSD cards ranging in size from 512 MB to 32GB, the latter holding 8,000 songs, which is probably more songs than I've ever heard in my life. Of course, up until 2011 I refused to listen to anything not sung by Neil Diamond or Juice Newton. Like the oldKube, newKube retains its marathon power capabilities, with 6 hours of continuous play possible after a single, one-hour charge. I'll vouch for this too. I tested it out once when my ex started talking at me about the future, and 5 hours 17 minutes into the lecture Juice was still crooning "Queen of Hearts" with perfect strength and clarity.

newKube MP3 nuggets come in pink, black, white, and red. They recharge via a Lithium Polymer battery and USB cable.

AirPods, Galaxy Buds, Bose QuietComfort - you've all had your turn in the true wireless earbuds spotlight. With their Mode II in-ear Bluetooth headphones, the Marshall audio brand is hoping to turn you all into Jans crying...

You might choose your headphones for the sound of them, but there's nothing wrong with the sight of them getting you pumped to pump some audio too. Minoxidil's Rainbows are modular over-ear headphones that will boost...