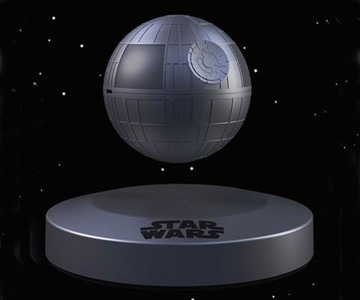 The Death Star Levitating Speaker doesn't so much pose the question of how hard you'll rock out while listening to it as it does the more philosophical question of how hard occupants of the Death Star rocked out while on it. You know, on their days off. While they were on guard alone, or with just their good friend Cornelius. Mornings in the shower when they thought no one else was around.

The Star Wars Death Star version of the now-ubiquitous levitating speaker suspends above a magnetic base, and will do a little spin for you if you give it a push. The Bluetooth 4.0 speaker also has a rechargeable battery with 5 hours of playback time for full portability in case you want to drop a Death Star on the next BBQ or dinner party you're invited to.

If you're not a Dark Side kind of kid, summon The Force to click here and check out a similar floating speaker in (slightly more subtle) R2-D2 style.

While I can't play a guitar, and know nothing about guitar builds and quality, I do LAVA ME some carbon fiber, and LAVA's LAVA ME 2 unibody guitar is made with Super AirSonic carbon fiber material. And not only to make...