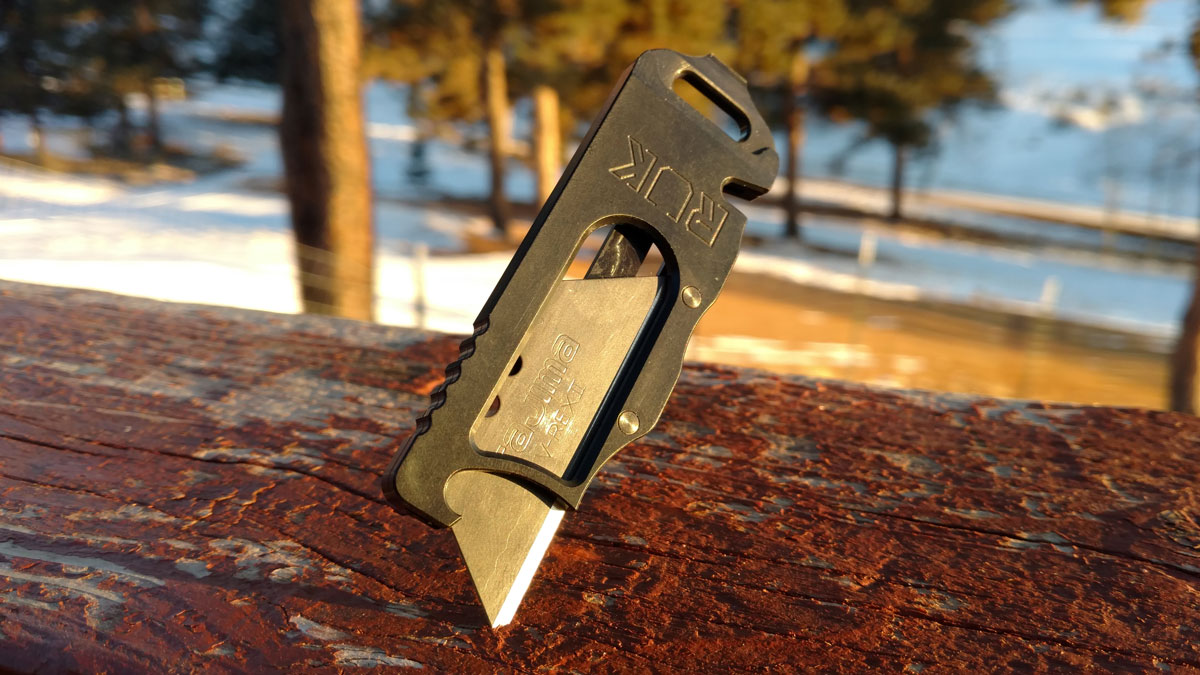 The RUK, or Rapid Utility Knife, comes from Gil-Tek, a family run business out of Colorado. Its design is based on the owner's own daily carry needs, which typically don't require the entire edge of a blade but, as it were, just the tip. So the RUK takes some desirable features of a full pocket knife - namely a one-handed operation - and applies them to standard utility blades and a unique sliding casing.

RUK blade access comes via a mechanism similar to those on sliding USB flash drives, except it also locks the blade in both its extended and retracted positions. And for times you're more interested in guzzling than cutting, standard RUK knives also have a bottle opener built into their ends.

Gil-Tek's RUK V2, available in anodized aluminum or titanium, adds a few other tools to its finger-sized footprint: a pry bar / screwdriver on the end; a fishing line / string cutting opening; and a 1/4" hex for driver bits.

The Auto-Guard Razor Blade Scraper, according to maker Kripto Tools, can assist with at least 66 tedious household tasks. Which is at least 60 more than I can. Designed with an ergonomic handle and retractable blade guard...

You knew elves have pointy toes, but did you know they also have razor sharp teeth? At least, this Little ELF does. The Little ELF endeavors to be a big helper when you hunker down to wrap your Christmas and other holiday...

The NEIKO 4-In-1 Folding Utility Knife reminds me that even though multi-tools aren't all the rage like they were circa 2015 when Leatherman debuted their Tread, they can still be solid pieces of EDC with, as their name...

The M5 Titanium Nano EDC Blade is tiny, tactile, and ready to tackle tasks by the ton. Or at least, like, the handful, but that ruins my wordplay. A new issue from Gadget Master, the M5 is a fetching stainless utility...

The Slice Box Cutter might not be on your holiday wish or gift-giving list this year because you or your recipients want one, per se, but it could be good to throw it on there anyway. With around $225 billion of holiday...

I'm afraid I'm a little late to the blade show because, at printing, Sniper Bladeworks was already sold out of a few knives / styles in their Signature Reload series, and running very low on others. But you still have...

I like the Sawyer Utility Bracelet. I like it for its leather-and-steel aesthetic, and I like it for its proposed method of carrying around a utility knife, which is one that takes up zero room, and creates zero bulge...

I see your green thumb, and raise you an orange thumb! With a razor sharp fingernail blade sticking out its end! This Silicone Thumb Knife is made to make harvesting your fruit and vegetable bounty, and pruning your indoor...

Not a whole lot that looks safe about this Razor's Edge Safety Ring Knife, but I guess compared to JHO Knives' Nug, this ring knife is almost cuddle ready. Doesn't hurt that it comes in an array of rainbow colors, and...