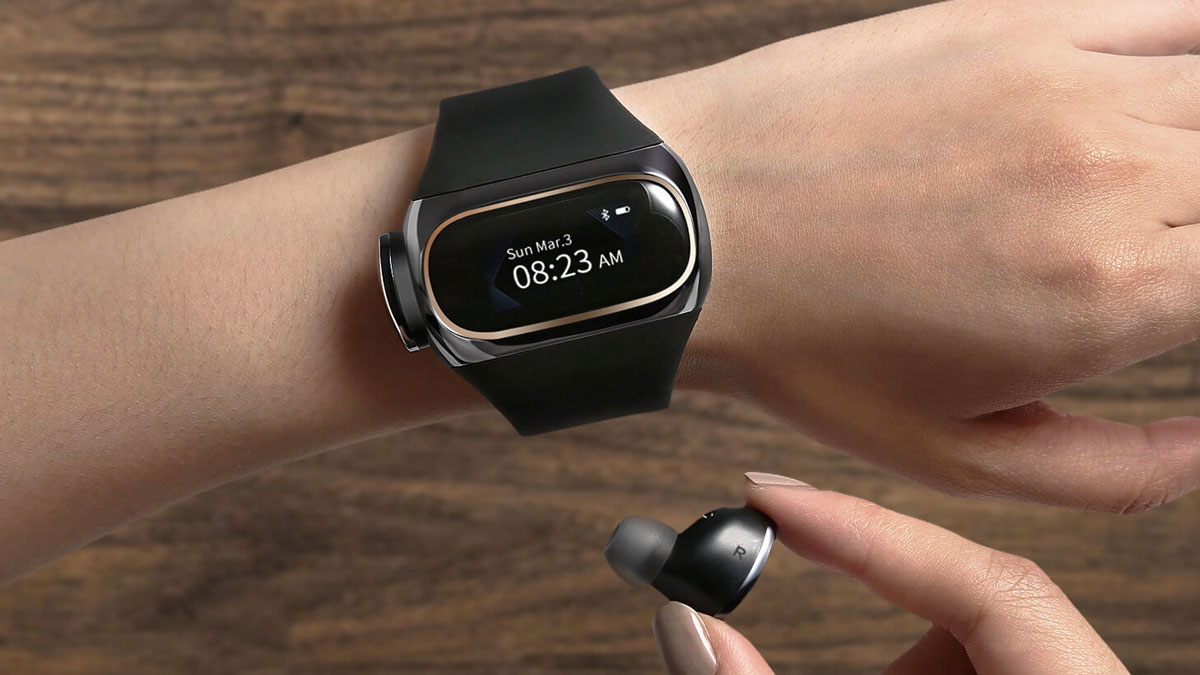 Wearbuds see your true wireless earbuds-ness, Apple AirPods and Samsung Galaxy Buds, and raise you a wearable wristband as their charger! The sound-channeling ear nuggets have the same desirable features as other wireless earbuds - Bluetooth 5, a Qualcomm audio chipset, graphene-augmented drivers, and IPX6 water-resistance - but instead of living in a slippery charging case you can lose from your pocket or to the abyss of your backpack, Wearbuds store and charge inside a fitness band buckled to your wrist.

The Wearbuds wristband also doubles as a fitness tracker so you don't have to double up on wristbands.

Wearbuds earbuds click flush inside the outer frame of the band's watch face. To access and remove them, press your thumb and point finger against the buds to pop them out partway, and then grab hold. (Yeah, I'm thinking that while this design is more convenient for keeping the case close at hand, it carries the same, if not a higher, probability that my butter fingers are going to fumble and drop the buds when taking them out and putting them back in.)

With built-in wristband sensors and iOS / Android app pairing, Wearbuds are poised to be a top choice for athletes and workout warriors who like the idea of integrating their wireless earbuds with their fitness tracking. Even casual joggers, hikers, and cyclists, plus your average bear, might appreciate having a watch, alarm clock, heart rate monitor, and message reminder woven into their earbuds' charging case.

You can learn more about and pledge for some Wearbuds and their wristband charger here on Kickstarter through August 4, 2019.

Conduction Labs Allegro Earphones send audio right into your earhole without ever touching it. Kind of like how your brother used to dangle his finger in front of your face, sending peak levels of annoyance and rage right...

AirPods, Galaxy Buds, Bose QuietComfort - you've all had your turn in the true wireless earbuds spotlight. With their Mode II in-ear Bluetooth headphones, the Marshall audio brand is hoping to turn you all into Jans crying...

One of Hadoro's latest custom mods takes aim at AirPods, giving Apple's earbuds a matte black wash, a carbon fiber composite charging case, and a $700+ price tag. But hey, if the carbon fiber AirPods are too spendy for...