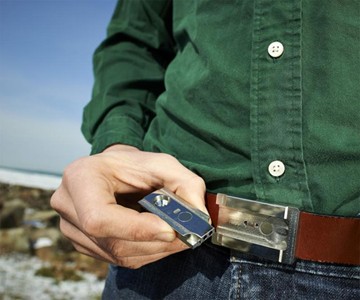 Stylish and stealth, the removable buckle is machined from solid blocks of 6061 aluminum, and then nickel plated in a facility that fabricates materials acceptable to put in your mouth when the clock strikes pufftime. Pipes latch to their accompanying belts magnetically, as well as employ two Neodymium magnets to generate a constant pull and establish a tight, rattle-free seal. To eject the Buckle Puffer from its belt users press a magnetic powered release button whose hold will never wear out. That's good news for my friend Tobias who is both a pothead and OCD, and so will probably end up clicking and unclicking the pipe all day long to satisfy urges deriving from one or the other of his conditions.

The Buckle Puffer runs as an Indiegogo project through April 29, 2013.

December 2013 Update: While Buckle Puffer funding was unsuccessful, its creators are still producing and selling them to the public through the company's Website--follow the link below.