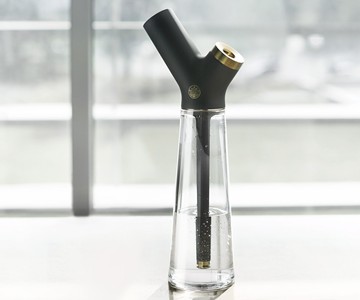 Sorry, hippies and artistic stoners. Now that marijuana is this close to mainstream acceptance, and not that much farther away from legalization, it's time for the techies and trendsters to move in and take over the conception, design, production, and marketing of its associated paraphernalia. Oh, and the profits. Definitely, definitely the profits. This is how they'll spin it: "A look into existing cannabis products reveals the absence of a brand that connects with the mature, style conscious, and forward thinking market that has emerged."

I think it looks nice.

Really. Granted, I don't feel something like the Aura is necessary when I'd rather have a "contemporary object" that can, say, give me an orgasm every time I touch it and whisper, "galoshes," but I could say the same thing about a good 90% of the stuff I write about here, so I don't really know why I'm giving Aura such a hard time. Probably just because it's almost 11 a.m. here and I still haven't been fed yet.

If you're going to modernize the bong, try to turn it into a piece of desktop architecture, the Aura concept (yes, still just a concept/prototype) is a pretty good way to do it. It looks kind of like one of those instant whipped cream dispensers and, according to its quad of Washington- and California-based creators, works just as dreamily. Its build consists of a matte black Y pipe at the top, one side for the bowlpiece and the other for your own suck & blow hole. Beneath the assembly lie a diffuser, an ash catch, and then a percolating wand extending into the main water/smoke chamber. Aura intends to simplify assembly, disassembly, usage, and cleaning with an ergonomic mouthpiece design, a single thread pitch for top end attachments, and shatterproof materials.