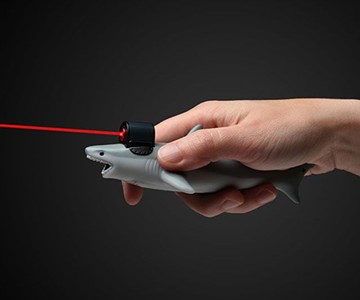 Hot off the endangered species list: great white sharks...with frickin' lasers! Actually, Dr. Evil's cycloptic sidekick was misinformed. According to the World Wildlife Fund, great white sharks are vulnerable, but not yet classified as endangered. This is most likely because they have started using head-mounted lasers to protect themselves when their length of 16' to 20', mass of between 4,000 and 7,000 pounds, and teeth of your worst nightmare on an acid trip through the blazing fires of hell underwater fail to do the trick.

As an homage to the Austin Powers series, as well as sharks' enviable adaptability, ThinkGeek unveils this small-scale Shark with Frickin' Laser Pointer. As with real mutated sharks, a searing beam emanates from the top of the 7" Mini Me's head, though rather than sizzling all living things with which it makes contact so as to enable its host to enjoy a warm meal, this laser only temporarily marks them with a red dot.