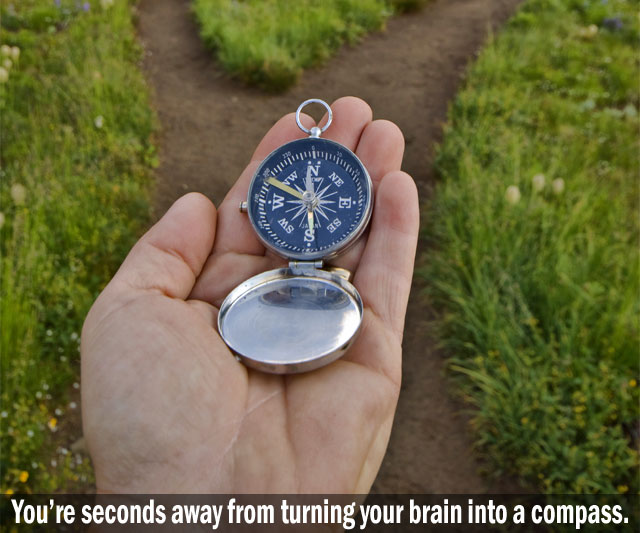 Yee haw! It's December 22, 2012 and we're all still here! Able to continue breathing, eating, working, gaming, online shopping, consuming, and generally navigating through life. Hmmm. Maybe I should take this non-apocalyptic turn of events as an opportunity to acquire a better sense of direction. Yeah, yeah, Mom, in the figurative sense too, but right now I'm talking literally. North Paw literally.

The North Paw kit assembles into an anklet that vibrates to tell its wearers which way is north, ultimately training their brains to intuitively orient themselves in any situation or environment. In other words, it will turn those who use it into Human Compasses. Human Compass is probably as close to a superpower as I'll ever be able to get. OK, I'm listening. How does this thing work?

The North Paw casing houses 8 cellphone vibrator motors that, when worn, evenly encircle the user's ankle. A control unit that senses magnetic north turns the motors on and off, and at any given time only the motor closest to north vibrates. As the skin continually senses this vibration on different parts of the ankle, neural pathways communicating this information with the brain quickly begin training it to associate the sensation with direction. According to North Paw creator Eric Boyd, "Most people 'get it' mere seconds after putting it on, and can then reliably point north when asked." It's directional understanding at a subconscious level. It's absolute orientation. It's take out your compasses for the last time, and say adios to their wonky needles and cylindrical shells.

Boyd's idea for the North Paw stemmed from research done at the University of Osnabruck in Germany, which had test subjects wear a belt rather than an anklet in its study. With the belt on nonstop for 6 weeks, wearers reported successive stages of integration, wherein the plasticity of the brain allowed them gradually to gain a somewhat superhuman ability to navigate their surroundings.

The North Paw kit includes all parts necessary for assembling a fully functional compass anklet. This means you get:

Assembly instructions are available here on the Sensebridge Website. The current North Paw model kit for sale is V2.0.

At our wedding, my wife, She-Ra: Princess of Power, told me we'd be together 'til we're 102, so while most of you out there might not need the 100-year calendar that tops this Nautical Brass 100-Year Calendar Compass...