Cinema on Your Finger Pico Projector 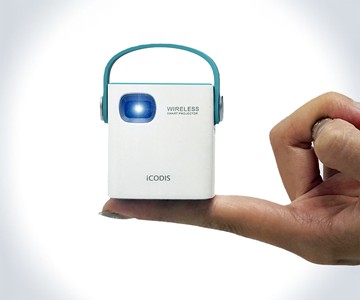 Now that we're all adequately equipped to take selfies everywhere we go, the iCODIS mobile projector would like to facilitate our ability to play them back at any moment as a slideshow. For friends at a house party. For the whole wide world on the wall of a freshly painted building downtown.

While less than a year go the UO Smart Beam Laser Projector claimed to be the world's smallest at 2.2", it seems the iCODIS has shrunk the claim further with its 1.7" cube of a home theater. Projection and playback specs are similar, though the iCODIS issue outputs at 80 lumens, while UO's stops at 60.

The full rundown on what iCODIS calls its "Cinema on Your Finger":

The DropKey Pop-up Studio in a Bag, an inflatable green screen that packs into a mid-size duffel, makes it even easier for any jackass to create and post content on the internet like a pro. By "content" I mean reviews...

What Should I Watch? Streaming Service Decider Dice

At the top of the list of first world problems: stress and anxiety over what, out of thousands and thousands of options across Netflix, Hulu, Prime Video, HBO, Apple TV*, Disney+, and dozens and dozens of other streaming...