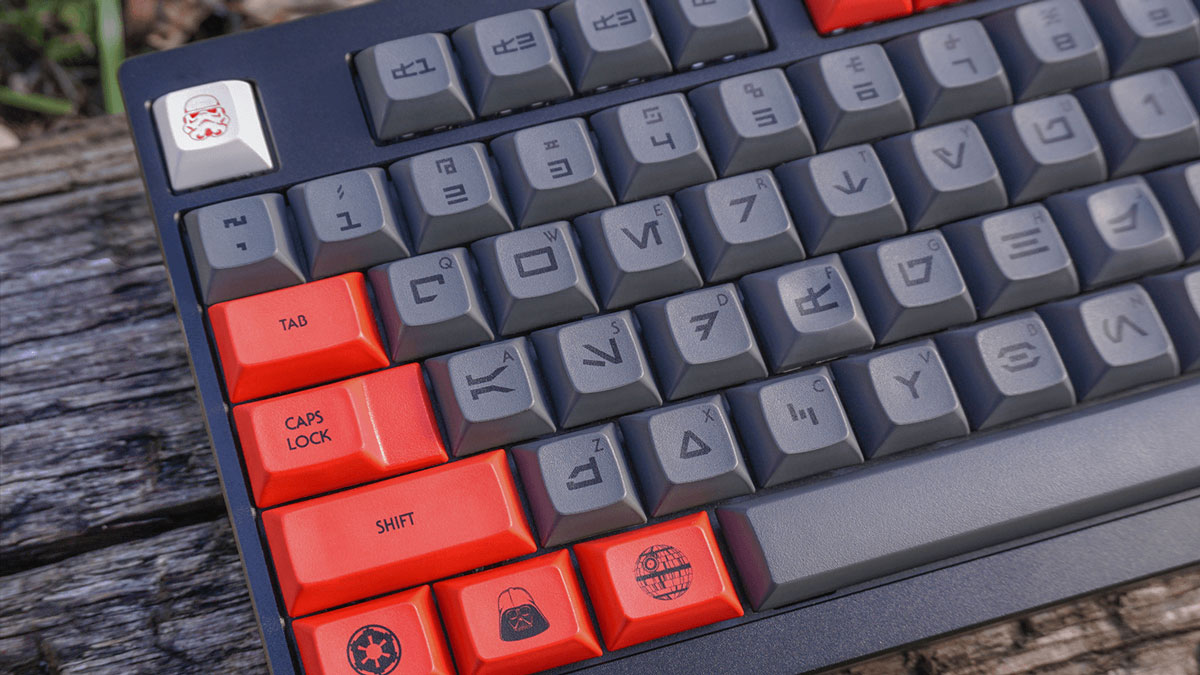 It's official: you can now swathe your keyboard in the emblems and Aurebesh of the Empire with this officially licensed Star Wars Galactic Empire DSA Keycap Set. Well, you can get in line to do it anyway. Preorders for the keycaps, available in straight Aurebesh for the hardcore bilinguals, or Aurebesh with English Sublegends for those of us not quite there yet, run from December 10, 2018 to January 5, 2019, and then you'll have to wait a few more months after that for shipping to begin.

Galactic Empire sets come with 157 PBT dye-sublimated keycaps, including 8 novelty caps with designs such as Death Stars, stormtroopers, and Lord Vader himself to make it clear which side you're on (i.e., the one with cookies.)

Though Galactic Empire DSA Keycap Sets won't arrive in time for Christmas, if you've got the wad of cash to spend on a Star Wars gift for a fan, I'm sure they'd accept a printout of the key grid as a promise of what's coming for them in March or April.

BreakWooden transforms wood nuggets and resin goo into a collection of striking, nod-to-nature keyboard wrist rests. We've certainly seen these two materials come together before in a similar fashion to make coffee tables...

Smartphones are getting bigger...and they're getting smaller. Not that the Moment smartwatch is a fully functional phone per se, but with its wraparound 360-degree touch surface design and full QWERTY keyboard, wearers...

Ctrl+Alt+D*ckhead: regain control of your life...or at least your PC. No? Too cumbersome to have to press a giant pink penis with a face on it every time you need to delete something? OK, how about installing the Dickhead...

This keyboard is begging for a high-five. And not just because the Glove80 is a keyboard split in two, and contoured to look roughly like a left and right hand (OK, left and right mitt) that will end up giving you some...

Superheros and their nemeses covering the keys of my MacBook? Yahtzee! I mean, Shazam! Never before did I realize how boring and uninspired a black-and-white keyboard really is. Thank you, superhero skin genius Killer...

I know you've been on the computer all day, and are sick of typing emails, and presentations, and explanations, and proposals, but...hello. In all lower-case cursive. Or maybe just a smiley face icon named Happy Mac...

Now this orbiTouch contraption looks easy to use. It's a keyless keyboard and mouse combination that requires no more effort than forgetting everything you've ever learned about the QWERTY layout and reconditioning yourself...